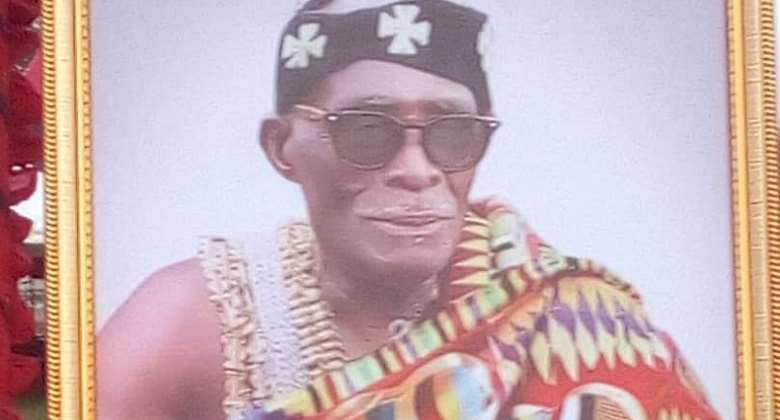 The mortal remains of Nana Ogidigram Okuripi Asiedu Kobena Botwe II, Chief of Swedru, were on Saturday laid to rest at the royal cemetery of the town, in the Central Region.

The funeral of Ogidigram Botwe, who was the Adontenhen of the Agona Nyakrom Traditional Area, was attended by personalities including the Central Regional Minister, Justina Marigold Assan, and Mrs Cynthia Mamle Morrison, the Member of Parliament for Agona West.

The Overlord of Agonaman, Okofo Katakyi Nyarkoh Eku X, sat in state with his divisional chiefs and Asafo companies, at the Swedru Sports Stadium, who displayed the traditions and customs of the people, amid musketry.

In a sermon, Rev Stephen Kofi Anarfi, the Swedru District Minister of the Presbyterian Church of Ghana, paid glowing tribute to the late chief for his active service to the Church.

He said the chief did not allow his position to override his service to God, taking Jesus Christ as his Lord and personal savior as a living soul.

“It is appointed unto man once to die as the word of God states and after death there is judgment. So, it is incumbent on man to live a life worthy of emulation,” Rev Anarfi said.

He exhorted the mourners to do away with discrimination, hatred, disunity and behaviours that could bring destruction to society.

Nana Kweku Esieni V, the Regent of Swedru, praised residents of the town for their support during the “seven days of celebration of life,” of Nana Botwe.

He commended the five-member funeral sponsorship committee and the entire members of the Swedruman Council of Chiefs for their hard work, dedication, patriotism and selfless services during the 40 days and final funeral rites of the chief.

Paramount chiefs and queen mothers from the Central and Ashanti regions and some metropolitan, municipal, and district chief executives were also present to bid farewell to the Swedruhene.