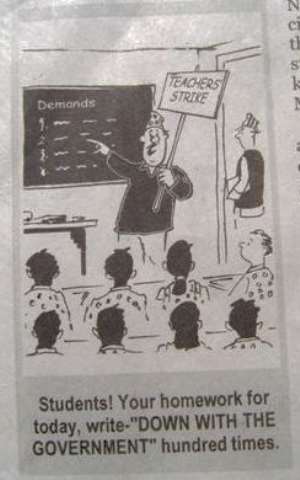 Striking teachers who fail to report for duty by Monday the 6th of this month will not be paid their November Salary.

According to the education authorities, this is in fulfillment of the financial administration regulation 297 sub-section one which empowers the employer to withhold the salaries of staff who fail to honor their obligations without justifiable reason.

Almost 6800 teachers' mostly members of the striking graduate teachers had their salaries withheld for the month of October; a situation the teachers say poses a challenge to compliance with the court order to end the strike. However the education authorities say they are acting in accordance with the law.

Acting Director General of the GES Michael Nsowah told Joy News that they are monitoring the situation to strictly apply the law.

“Almost all the directors have headquarters all over the country monitoring the situation. They would be bringing reports by tomorrow. It started on Monday so we are expecting them by tomorrow Friday”.

“By our regulation let's say if you don't teach for the first 10 days, it's assumed that you don't want the month's salary and therefore that's why people are saying the 10th”.

“But we still have 10 working days we won't include the weekend. If people go to work now they will get their November salary. After 10 working days if the person is not in the classroom then we will assume that he has vacated his post”, he said.