The Applause Ended for Mahama a Long Time Ago 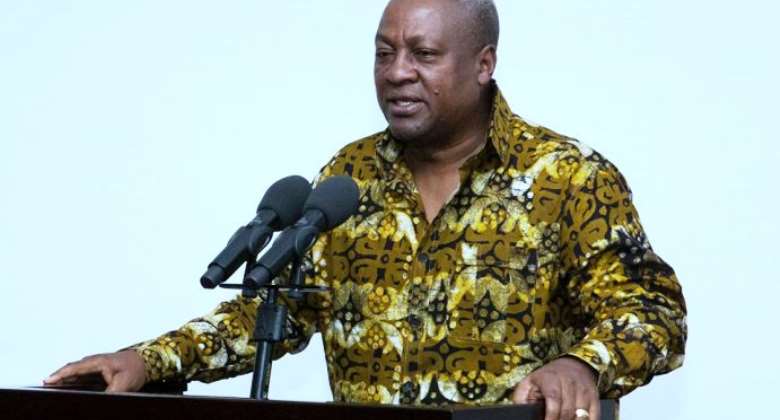 She is a shameless and a veritable political nuisance, a parasite and one of the dozen-and-half, or so, members of the Ghanaian taxpayer-freeloading staff appointees of former President John “SADA-Nkonfem” Dramani Mahama who think that they have an inalienable constitutional right, and even a bounden obligation, to fleece our national treasury in perpetuity. She is also the first cousin of Yagbonwura Kwame Gonja, as the former President is also popularly known; but a section of the operatives of Ghana’s media appears to have given her a pass by mischievously describing Mrs. Joyce Bawa Mogtari as a “Special Aide” to the most prominent albeit insufferably kleptocratic politician to have emerged from the Akufo-Addo-created Savannah Region in recent decades.

Not very long ago, this Mahama cousin was widely reported to have delivered a set of triplets, non-vaginally, whose photographs were widely splashed across print-newspaper pages and media portals all over the country and well beyond. So, it is indisputably obvious why Mrs. Mogtari, a former Cousin Mahama-appointed Deputy Minister for Road Transport, would be desperately, albeit ineffectually, fighting to have her Chief Patron, Financier and Paymaster returned to Jubilee House. Fat chance, I say. Well, fat chance because however grossly incompetent and even kleptocratic Nana Addo Dankwa Akufo-Addo’s Finance Minister may be deemed and widely suspected to be, the fact still stands that in Osagyefo Kwame Gonja, Ghanaians have witnessed official corruption at its most unprecedented heights, at least in the unimpeachable and memorable words of the late President Jeremiah “Jerry” John Rawlings, the nationally and globally acclaimed Founding-Father of the National Democratic Congress.

Indeed, until his death at 74 years old, in November 2020, the former Chairman Rawlings never ceased drumming deafeningly into the ears of all sound-of-mind and hearing Ghanaian citizens that Mr. Rawlings’ former Communications Minister was incontestably the most thoroughgoing corrupt politician to have been produced by the country since Independence on March 6, 1957. The latter milestone is rather fascinating because the man who invented the patently inglorious practice of ethno-regional nepotism in Fourth-Republican Ghana was born almost exactly a year after the country auspiciously reasserted its sovereignty from British colonial imperialism. So, in a practical sense, the widely alleged Third-Class Graduate of African History from the University of Ghana, Legon, most closely, more than any other major Ghanaian politician, epitomizes the fundamental essence of corruption of the most heinous and treasonable proportions.

Which is also why it could not be deemed to be more heretical and even downright blasphemous, when Joyce Bawa Mogtari, whose husband and Mr. Mahama’s brother-in-law also served as an executive operative in Kwame Gonja’s government, calls for the immediate resignation of Mr. Kenneth Ofori-Atta, that is, the Finance Minister, or the latter’s prompt and unreserved dismissal by Cousin Kwaku Willie Addo Dankwa Akufo-Addo (See “Leave Before the Applause Ends, Fighting to Stay Is a Bad Idea – Mahama’s Aide Tells Ken Ofori-Atta” Modernghana.com), the Bole-Bamboi native, from the Akufo-Addo-created Savannah Region, can at best only be taken with a cargo train filled to capacity with snow-thawing salt. Mrs. Mogtari simply lacks the requisite political and moral credibility to make such a judgment call. Which, of course, is not to absolutely in any way imply that Mr. Ofori-Atta would not be doing the overwhelming majority of the Ghanaian citizenry great good to honorably exit his post partially on his own terms.

Well, Dear Readers, there is an inescapably ironic twist here; and it is, needless to say, the fact that the metaphorical “applause,” which Mrs. Mogtari references in her rather vacuous and downright preposterous call for the exit of Mr. Ofori-Atta from the Finance Ministry, ended for the critic’s own Cousin Kwame Gonja more than 6 years ago. And yet, the Bole-Bamboi native, from the Akufo-Addo-created Savannah Region, continues to kick and scream like a teenager to be allowed back into Jubilee House, so he could continue to blindly and unconscionably fleece Ghanaian taxpayers to the marrow. Indeed, so nonesuch or unprecedentedly greedy is Osagyefo Kwame Gonja that shortly after his seismic democratic trouncing and ouster from Jubilee House, the former “Shit-Bomber” of the opposition media establishment in the heydays of late President Rawlings rudely demanded to be gifted with the official residence of the Vice-President of Ghana, the very same house in which the late Vice-President Aliu Mahama had resided for 8 consecutive years, as the second-most-powerful Executive-of-State in the laudably progressive government of President John “Gentle Giant Kofi Diawuo” Agyekum-Kufuor.

Now, the most logical question that needs to be asked is as follows: “Had the two-term Vice-President Aliu Mahama demanded to be allowed to keep the official residence of the Vice-President of the Sovereign Democratic Republic of Ghana, where would the one-term Arch-Lieutenant to the late President John Evans “Atta-Woyome” Mills have lived in January 2009, when Osagyefo Kwame Gonja assumed the reins of governance as the Atta-Mills’ second-bananas?” The fact of the matter is that parasitic politicians like Yagbonwura Kwame Gonja and Cousin Joyce Bawa Mogtari have absolutely no regard or sensitivity towards the plight of the average working-class Ghanaian citizen, let alone the abjectly poor and destitute whose children and wards are the primary beneficiaries of Nana Akufo-Addo’s Fee-Free Senior High School System.

But what is even at once more risible and scandalous is the fact that the so-called Censure Motion brought against Mr. Kenneth Ofori-Atta by the National Democratic Congress’ Parliamentary Minority is largely predicated on “hearsay allegations,” in the words of House Speaker Alban SK Bagbin, and not on any forensically proven or provable evidence systematically and meticulously assembled by the plaintiffs. Now, that is how morally bankrupt, damn wretched and pathetic is the caliber of the members of the NDC Parliamentary Minority. As a professionally trained lawyer, this is what political cynics and freeloaders like Mrs. Joyce Bawa Mogtari and Mr. Felix Ofosu-Kwakye ought to be seriously concerned about.