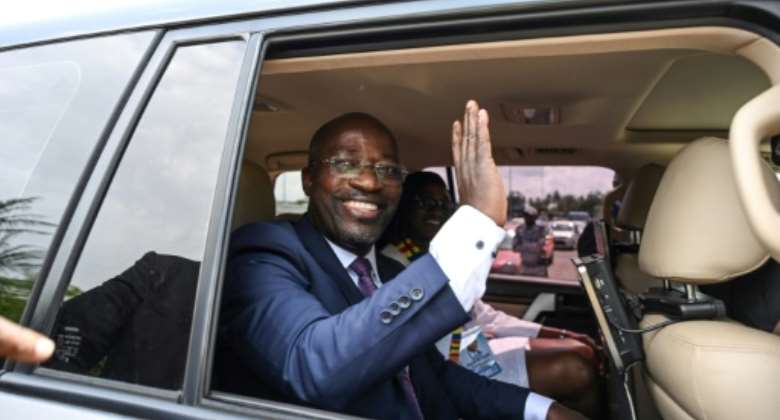 Wearing a suit and tie, the 50-year-old landed at the airport in the economic hub of Abidjan. By Sia KAMBOU (AFP)

Charles Ble Goude, a key figure in post-electoral violence in Ivory Coast 11 years ago, returned to the country Saturday for the first time in more than eight years, hinting that his political ambitions remained undimmed.

The former right-hand man to ex-president Laurent Gbagbo, dubbed the "street general" for his ability to organise a crowd, was acquitted along with Gbagbo of crimes against humanity charges by the International Criminal Court last year.

Wearing a suit and tie, the 50-year-old landed at the airport in the economic hub of Abidjan after flying in on a commercial flight from neighbouring Ghana, according to an AFP reporter on the scene.

Later addressing thousands of his supporters in Abidjan, Ble Goude thanked the Ivorian authorities for facilitating his return and said his "duty" was to "support the peace process".

"I am not passing through, I have come here for good. Your leader has arrived. You are no longer orphans," he added in a speech regularly marked by rapturous ovations from the crowd.

Ble Goude hailed his supporters in heavy rain from the retractable roof of his car as it travelled through the streets, where people welcomed him with banners and cheers.

The office of Ivorian President Alassane Ouattara, who earlier this year pardoned his predecessor Gbagbo in the name of national reconciliation, has approved the return.

'A nation to build'

Around a dozen people including Simone Gbagbo -- wife of the ex-president -- had gathered to welcome the controversial figure at the airport.

"We are very happy, we waited for so long. We have a nation to build... with your energy, I am sure you are going to play your part with us," she said at the event in Abidjan.

Some 3,000 people were killed, with Gbagbo arrested in April 2011. Ble Goude was detained in Ghana in 2013 and transferred to The Hague the following year before his acquittal in March 2021.

Ble Goude is the last major pro-Gbagbo figure from the post-electoral crisis to return to Ivory Coast.

Security was tight around the airport on Saturday. A few hours before Ble Goude's arrival, police shooed away most journalists, and a planned press statement was cancelled.

In 2015, he launched his own political party, the Pan-African Congress for the Justice and Equality of Peoples. Like Simone Gbagbo, he has not joined Laurent Gbagbo's African Peoples' Party -- Ivory Coast.

Ibrahim Sorie Yillah, vice president of the ICC's victims' fund, said Ble Goude's return was a significant moment but did not draw a line under the post-electoral violence.

"A large number of victims of crimes committed during that period continue to wait for reparations for the harm they suffered," he said.