CJN Ariwoola’s Joke Was A Laughing Matter, Not A Political Matter; Let’s Calm Down 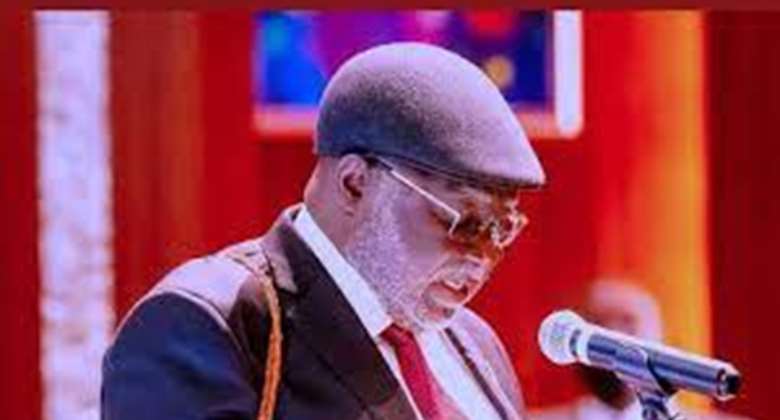 Humor, as we know, just feels good; it distracts us as humans from our problems and promotes a lighter perspective of life.

The Chief Justice of Nigeria (CJN), Olukayode Ariwoola, especially in times like these in Nigeria, where we are in challenging times where everyone is faced with all sorts of stress and tension in society, complicated by the current heated politics.

We should praise the CJN for his sense of humor, as it can improve his mental and physical health, boost his emotions, and even improve his leadership.

The CJN clearly was best fit to tell jokes as the main non-professional politician in the midst of popular politicians; he used comedy to highlight politicians’ behaviors and, in the process, helped shape the public’s view of them.

The judge did not engage in any political activity. As an Oyo State native and citizen, it is not wrong for him to respond to an invitation from his state's governor, Seyi Makinde, as part of his social responsibility and common courtesy. If other politicians and governors known as the G5 or members of the integrity governors were present at the reception, that is beyond the control of Justice Ariwoola, the invitee.

The chief judge was again on invitation in the midst of politicians when he was in Port Harcourt, Rivers State, as a guest of Governor Nyesom Wike, one of the G5 members, for the inauguration of judiciary projects in the state.

The Chief Judge, apparently realizing that the G5 was gathered again and that there was a relational aspect to the politicians, went on to make family and political jokes and certainly at no time threw out a judicial joke about politicians or the coming elections.

Here are some of his jokes; he said his host (Governor Wike) was threatening to withdraw Makinde’s wife, who is from Rivers, from Oyo, expressing hope that Makinde would emulate Wike to replicate the good works in his state. In fact, he was using joke to ridicule his kinsmen.

Ariwoola went on to say, “That is why we should not be scared to have these men of the integrity group.” “And I am happy that my own governor is among them because he would try to imitate his friend and in-law because we came here to marry for my governor.”

Again, he is using jokes to tell his home governor to make improvements in Oyo State for their people. What is wrong with that? Absolutely nothing.

He further ridiculed his Oyo brother: “So, Governor Wike will always threaten that he will call back his sister if my governor fails to play ball. That is why you see him following his Excellency (Wike) because my governor is afraid of his wife being recalled.”

The Justice was proud that Governor Wike was creating institutions for human development in the legal area especially which will be a part of his legacy in Rivers State worthy of imitation in other states.

The Chief judge in a most appropriate way saw the wisdom in Wike’s institutional foundations when he said “The things that he (Wike) is bestowing to generations unborn will be hard to beat. That’s why he says it all. Anytime he has the opportunity, he will say. Yes, he would not be in office forever, but whatever time he has to spend in office, let it be spent very well.”

As a form of respect for the Judge, Governor Wike joked that, given what the society is going through and the magnitude of its problems, we are in the most difficult period in Nigerian history for any judicial officer and that he is praying that God will guide the CJN.

Wike went on to rebuke politicians like himself, and the problems they cause “Anytime we are going into transition, the crisis we have, will Nigeria survive? Will there be democracy? My Lord, everything falls on the judiciary.”

“So, I urge you, that the God that brought you now should also give you and your colleagues all the wisdom to see that this country is united. To see that democracy survives in this country,” Wike stated.

It is the media and a faction of the People's Democratic Party (PDP) that are drawing too many conclusions from family and political jokes.

But I must say that with ethical questions continuously surrounding the Nigerian judiciary, the CJN should remember that while he certainly has the right to enjoy himself and relieve stress, he should work hard to uphold and promote the independence, integrity, and impartiality of the judiciary and should try to avoid impropriety and the appearance of impropriety. This is not one of them.

Professor John Egbeazien Oshodi, who was born in Uromi, Edo State in Nigeria to a father who served in the Nigeria police for 37 years, is an American based Police/Prison Scientist and Forensic/Clinical/Legal Psychologist. A government consultant on matters of forensic-clinical adult and child psychological services in the USA; Chief Educator and Clinician at the Transatlantic Enrichment and Refresher Institute, an Online Lifelong Center for Personal, Professional, and Career Development. He is a former Interim Associate Dean/Assistant Professor at Broward College, Florida. The Founder of the Dr. John Egbeazien Oshodi Foundation, Center for Psychological Health and Behavioral Change in African Settings In 2011, he introduced State-of-the-Art Forensic Psychology into Nigeria through N.U.C and Nasarawa State University, where he served in the Department of Psychology as an Associate Professor. He is currently a Virtual Behavioral Leadership Professor at ISCOM University, Republic of Benin. Founder of the proposed Transatlantic Egbeazien Open University (TEU) of Values and Ethics, a digital project of Truth, Ethics, and Openness. Over forty academic publications and creations, at least 200 public opinion pieces on African issues, and various books have been written by him. He specializes in psycho-prescriptive writings regarding African institutional and governance issues. His most recent textbook publication is Concise Psychology: An Integrated Forensic Approach to Psychology for Global African Settings.