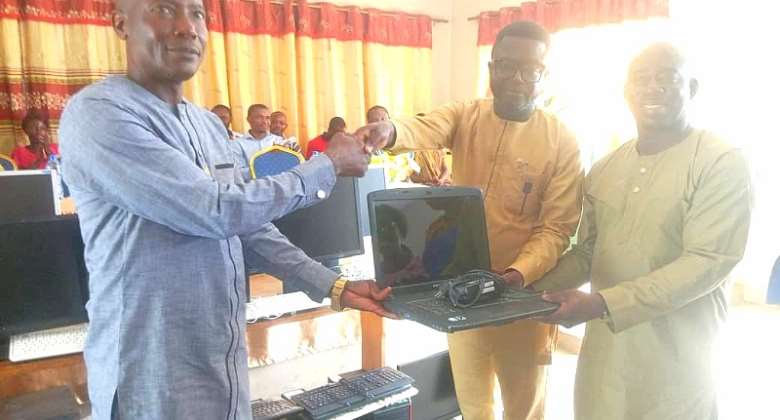 The gesture was to enhance the teaching and learning of ICT at Akrofuom Senior High Technical (ASHTEC).

The DCE acting through one Miss Ernestina Mensah, who is a member of the Ghana Union of Düsseldorf, petitioned German-based LABDOO to come to the aid of the school, in a bid to enhance the teaching of ICT.

Even though the computers were free, the packaging, storage and cost of freight which amounted to 540 euros which was supposed to be borne by the beneficiary school were paid by Hon Woode.

During the presentation, the Hon. DCE lauded LABDOO for so far donating 28,044 computers to 2,424 schools in 146 countries including Ghana.

The donation to ASHTEC included 11 desktops and 5 laptops with standard specifications.

The DCE said the computers had come at a time when knowledge in ICT has become important. He was optimistic that the computers presented will further enhance the teaching and learning of ICT in the school.

The District Director of Education, George Sarfo Kantanka expressed his profound gratitude to the DCE for his tireless efforts to resolve the countless challenges of the ASHTEC.

He again thanked the DCE for reviving the ICT Lab which was lacking computers.

He advised the school to keep the computers in good shape to continuously serve its intended purpose.

He further pleaded with the DCE to assist the school with air conditioners at the ICT lab and a television set for the students.