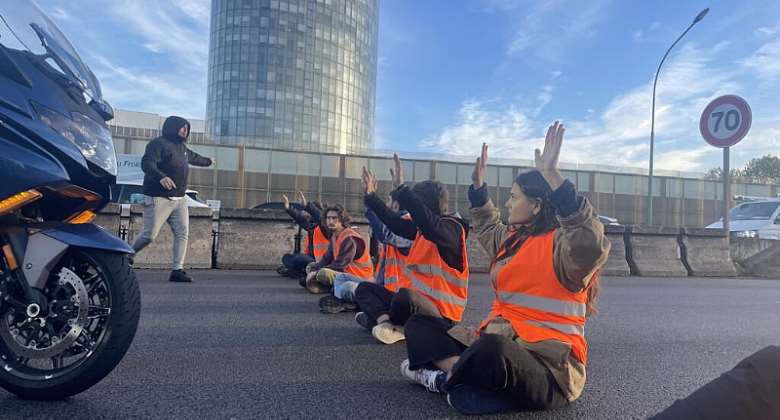 While some climate activists have been throwing food at famous paintings, a French group has been shutting down roads. Their acts of civil disobedience have drawn anger and criticism, but they say it is the only way to get people to pay attention to what they see as an existential threat.

Every few days, a handful of activists walk onto a highway or busy street somewhere in France and sit down, blocking traffic, facing insults from the angry drivers being held up.

Videos show drivers yelling and gesturing aggressively, sometimes physically picking up some of the activists and dragging them, while police try to clear the roads.

“The only way that we everyday people have left to put pressure on the government is to literally go and sit on the road,” says Victor, 25, who participated in his first act of civil disobedience at the end of June, when he and six other people, wearing orange reflector vests, blocked traffic on the A13 highway outside of Paris for about an hour.

“Blocking roads is the most effective way to put pressure on the government and also have a platform.”

Listen to an interview with Victor on the Spotlight on France podcast:

Victor is part of Dernière Rénovation (Last renovation), an environmental group that formed in early 2022 as part of an international network of movements calling themselves the “last generation” that will do “whatever it takes to protect our generation and all future generations”.

Their mode of action is civil disobedience to draw attention to very specific issues having to do with climate change. For Dernière Rénovation, the issue is building renovations.

Housing is the sector that uses the most energy in France, and it produces the most carbon emissions after transportation. The group stages acts of civil disobedience to draw attention to the need to pass more aggressive legislation to force the renovation of 5 million so-called “thermal sieves” – buildings that leak copious amounts of heat.

Since April, members of the group have blocked roads and interrupted sporting events, notably the Tour de France cycling race, which was interrupted by activists in the Alps in July.

'Everything else has failed'

Victor spends most of his days in front of two screens in his studio flat in the centre of Paris, working his day job in tech. He is a recent convert to the climate cause and its urgency.

“I don't actually think I'm doing anything for the climate. I'm doing something basically for my survival and the survival of the people I love,” he says.

He joined Dernière Rénovation because he found other parts of the climate movement inefficient.

“Direct action comes from the fact that everything else failed,” he says.

Victor recently interrupted a performance of The Magic Flute at the Paris Opera. During the second act, he got up onto the stage and attached himself to a ladder that was part of the set with a bicycle lock.

“If I'm here tonight, it's not out of pleasure,” he told the audience, wearing a white T-shirt on which was handwritten in block letters, “We have 879 days left”. The slogan refers to the three years the group believes are left to avoid a climate disaster.

He said he had prepared a personal speech, but the curtain dropped before anyone could hear it, and the whole intervention “was very badly received, but that was expected”.

A quiet, unassuming person, Victor is not used to putting himself into the limelight, and facing the audience's booing onstage was unnerving. He was taken offstage and into police custody.

“It's absurd that I have to interrupt an opera and I really did not want to be there, because it was a magnificent performance and I don't like people interrupting things,” he says.

“But at some point we have to ask ourselves what is happening, and we cannot keep living our lives as though everything is all right.”

“I know I'm angering the wrong people but I'm so deeply convinced that the government isn't taking enough actions and that's that what I'm doing is the right way – or at least the least bad way – to put pressure on the government,” says Victor.

These actions do draw attention. The day after he was released from police custody, Victor was a guest on a radio and a television programme, where he was grilled about his tactics.

This is not the kind of media attention he and the group are seeking, but they will take what they can get.

The same reasoning is what has driven activists to throw substances at art in museums, like the members of Just Stop Oil who threw soup at Van Gogh's Sunflowers at the National Gallery in London, or the Austrian activists who threw black liquid on a Klimt painting in Vienna to protest against the government's use of fossil fuels.

For Victor, such methods are justified to shock people into thinking about what is at stake.

“I know these [paintings] are maybe the most beautiful things that humanity has made, but they will not exist if we keep the word functioning as it is functioning right now,” he says.

The action drew Culture Minister Rima Abdel Malak, who visited the site during the clean-up and argued that “art and ecology are not incompatible”.

The group also drew attention from Prime Minister Elisabeth Borne. When asked in an interview about their tactics – roadblocks in particular – she said she “understood young people's anxiety”, but assured them that the government is very aware of what's at stake, even if she disagreed with their approach.

“I understand their concerns,” she said, adding that putting other citizens in difficulty was not the right approach.

Dernière Rénovation disagrees, of course, and Victor says he is fine being unpopular.

The issue, he says, is not him and his fellow activists annoying people on their commute, but that the government is failing to take “action that is coherent with the threat we are facing right now”.

“We are past the point of trying to have consensus,” he says. “We are at the point where we are facing extinction – we are fighting for our lives, basically, or our lives in the future.

This story was originally produced for the Spotlight on France podcast. Listen here.