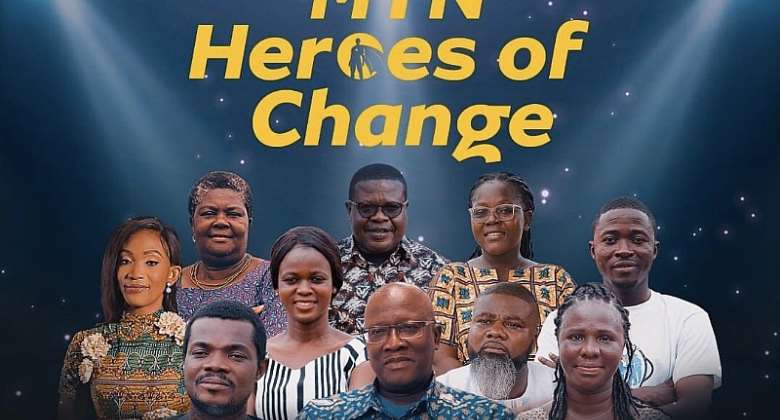 The MTN Ghana Foundation has recognized, encouraged, celebrated and honoured dedicated and selfless Ghanaians who have made significant impacts in the lives of people and communities.

The special edition dubbed the "Covid edition," which is also the sixth edition since the program’s inception in 2013, honoured 10 Ghanaians who were described by the foundation as "special ones."

Held at the Labadi Beach Hotel in Accra on Thursday, November 24, the programme targeted people who took the heroic charge and made tremendous contributions despite the covid-19, a period they referred to as a "critical one."

Mr. Robert Kuzo, Senior Manager, Sustainability and Social Impact at MTN Ghana indicated that the company holds the Heroes of Change celebration in very high esteem, indicating that it is a part of their commitment to making lives better.

He commended stakeholders, particularly the jury, who debated and chose the final heroes out of scores of applicants, for their remarkable work done throughout the edition.

The nominees, past heroes and members of the MTN Ghana Foundation as well as the invited guests who graced the programme were also acknowledged by Mr. Kuzo.

On his part, Prof. Franklin Manu, Board Chairman of the MTN Ghana Foundation described the heroes as "special ones" who stood tall at a time when many seemed to have given up and affected change, and also offered inspiration and hope to the hopeless.

In his words, "the heroes we are celebrating today can be described as the special ones because of the unique circumstances under which they operated (the COVID-19 era).

"To our ten heroes we say ayekoo," he continued to tout the astonishing achievements by the foundation, which is celebrating its 15-year anniversary this year, in 2022, assuring that whatever they have promised to do will surely be accomplished.

Before the heroes were officially introduced and honored, yet another inspiring and encouraging speech was given by Mr. Selorm Adadevoh, CEO of MTN Ghana.

In his speech, he emphasised that MTN Ghana "believes in doers, promotes doers and celebrates doers."

According to him, the outbreak of COVID taught the world about true heroism—compassion and selflessness—from individuals who rose and exhibited passion to change sad stories and situations in various parts of the country.

He said the MTN celebrates the heroes who "exemplified selflessness and patriotism given the impact you created in your communities during the pandemic."

To him, saying he is touched by the works of the heroes is an understatement, as their works are highly commended and appreciated by all.

In a way of urging all and sundry to also do their best to bring change in society, he said, "If we all do our bit, the hope and change we wish for our mother Ghana will be less of a dream but more of a reality," stressing that people should "be the change you wish to see around you."

The ten heroes were chosen from three categories: health, education and economic empowerment by the jury which analysed and scrutinised the nominees.

Two Heroes of Change were also celebrated in the education sector: Mr. Isaac Ampofo and Mrs. Portia Gabor of Accra-based TV3, the reigning GJA journalists of the year.

Speaking after being named Heroes of Change, all the awardees expressed gratitude to God, their partners and nominators, members of the jury, and the MTN Ghana Foundation for giving them such incredible recognition.

They promised to continue their good work to impact more lives and communities.

The Heroes of Change received citations and GHS 20,000 in cash to aid their chosen paths.

Speaking on the sidelines of the program, Mr. Robert Kuzo stated that the award is not biased but open to all who are making significant contributions to society.

He wishes to see the heroes do more and attract more people to their worthy and benevolent cause.

The programme was made entertaining and lively by electrifying performances by life band groups, a former MTN Mentor winner, and Jennifer "Lomotey" hitmaker Kurl Songz.