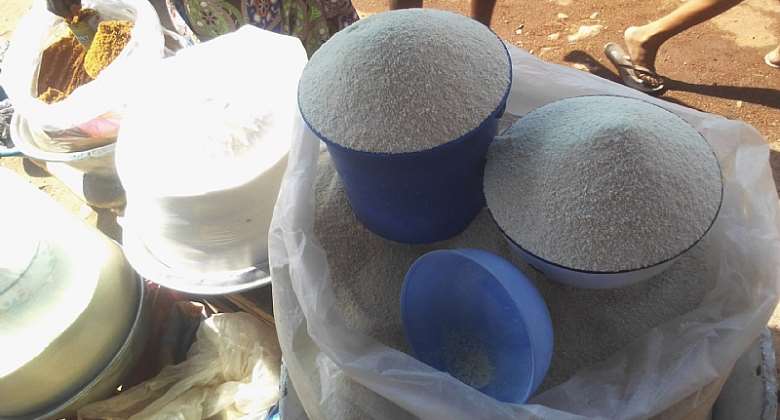 The prices of Gari and Sachet water in the Bolgatanga market of the Upper East Region have reduced following a decline in demand due to the increase in prices earlier in November.

According to some of the sachet water sellers, in an interview with the Ghana News Agency (GNA), demand declined as a result of the increment, which paved way for the former 'ice water,' unfiltered water tied in small rubber bags, sold at 20 pesewas, into the market.

“Ice water' used to be dominant in rural communities including those without electricity where sellers refrigerate it or put big chunks of ice on it to get it chilled. It used to be sold at an affordable price to consumers but was kicked out of the market as it could not match sachet water in terms of hygiene.

Though its purity is still in question, it is about affordability in this time of economic hardship, according to the consumers interviewed.

Mrs Eunice Ayamba, a sachet water producer, in an interview with the Ghana news Agency (GNA), said they were left with no option than to reduce prices to stay in business.

I usually supply my water to the Pelungu, Kongo and Yorigo among other communities in the region but overtime, I realized demand was coming down, my distributors would take water to these communities and return with almost same, because sellers still had water packed and could not take more since demand was low.

''Even in Bolga here, the demand for sachet water is high at Lorry stations, mechanic shops among others, but that is where ''ice water '' is dominating now and so we are left with no option than to reduce prices even though we are only breaking even,'' she added.

Ms Victoria Ayinbisah, alias Ama Gari, told the GNA that apart from students who said they were compelled to buy at the increased price because there was no option, most customers walked away when the increased prices were mentioned to them.

“In fact, we just don't have any option than to reduce prices because customers just walk away when you mention the price with some telling you it is better, they use their money for other foods instead of gari which should be affordable' 'she stated.