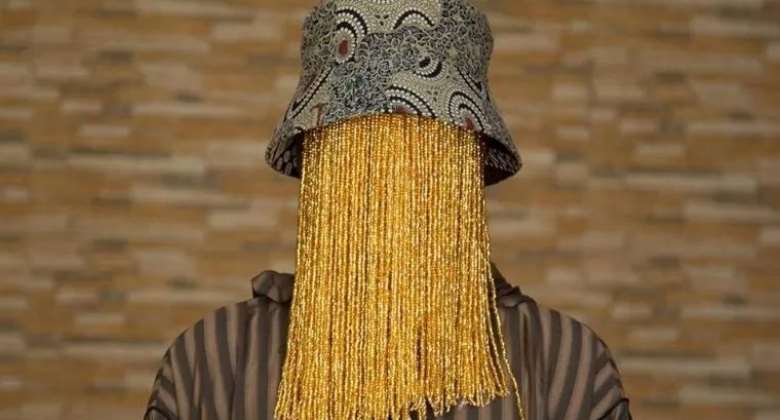 Tiger Eye PI has released a statement to debunk allegations of extortion and blackmail against its Chief Executive Officer (CEO) Anas Aremeyaw Anas.

In the statement, Tiger Eye PI says the allegations are only imagined and fabricated with no basis in reality.

“Tiger Eye PI dismisses all the allegations including extortion and blackmail against Anas Aremeyaw Anas. These allegations are imagined and fabricated, with no basis in reality,” part of the release said.

According to Tiger Eye PI, the allegations are antics by the perpetrators of corruption and their collaborators, to distract Anas Aremeyaw Anas from the facts of the recent exposé, ‘Gamasey Economy’.

While assuring the public that Tiger Eye PI is committed to fighting corruption using sting operations, it has challenged anyone with evidence of crimes against Anas Aremeyaw Anas to come forward.

“We challenge anyone with evidence of crime against Anas Aremeyaw Anas, to without hesitation, make same available to the relevant State authorities.

“Tiger Eye PI remains unwavering in its commitment to fight graft and crimes using sting operations (Anas principle), and absolutely nothing, be they threats or baggage of spurious allegations, will stop us from holding duty bearers accountable in the interest of God and Country,” the release signed by Anas himself concludes.

TIGER EYE RESPONDS TO ALLEGATIONS OF EXTORTION AND BLACKMAIL

1. Following the release of the Galamsey Economy exposè which focused on exposing the pervasive rot that is affecting the economy and investor confidence in Ghana, some persons have resorted to mudslinging and lies against the CEO of Tiger Eye PI, Anas Aremeyaw Anas. A video, made up of rehashed allegations from 2018 have been circulated on social media networks and other messaging platforms. Tiger Eye hereby responds to the contents of the said video, containing details which we have refuted on countless occasions.

2. Tiger Eye PI dismisses all the allegations including extortion and blackmail against Anas Aremeyaw Anas. These allegations are imagined and fabricated, with no basis in reality. Tiger Eye PI notes, that, these are antics by the perpetrators of corruption and their collaborators, to distract from the facts of our recent exposé. It also merits the question: why do such allegations only surface when there is an exposé?

3. In the said video, Mr Kwesi Nyantakyi's wife is seen and heard, sometime in 2018 on Metro TV, alleging that some persons had contacted her husband to pay some amount of money ($100,000) in order to drop the #12 exposé. When this allegation was first made, Anas Aremeyaw Anas challenged Mr Nyantakyi and his wife to sue him or whoever did what they're alleging, or report him/her to the police for extortion if they think their stale allegation is true (https://mobile.ghanaweb.com/GhanaHomePage/NewsArchive/Sue-me-for-extortion-blackmail-if-I-asked-for-100k-bribe-Anas-dares-Nyantakyi-s-wife-703414). It's however important to note that, she, as well as the trumpeters of the said allegation, fail to mention anyone's

name. As we speak, Mr Nyantakyi is standing trial for fraud and corruption. If this allegation were true, it would be absurd that he would not go any length to put whoever made those demands for bribes before the law especially when through Tiger Eye's anti-corruption operations, he has lost his job.

4. It's important to note that, the champion of these spurious allegations, Mr Kennedy Agyepong (also seen in the video), who splashed the photos of the late Ahmed Suale on his NET 2 TV prior to his assassination, is in court with Anas Aremeyaw Anas in a defamation suit. When he challenged the professional integrity of Anas as a lawyer at the General Legal Council, he was handed a defeat. Again, he has already lost the first round of defamation suit against him by Mr Abdul Malik Kweku Baako, where the court found his allegations to be unfounded and empty.

5. In the video, portions show Mr Charles Bissue's false claims. Tiger Eye refuted his false claims recently, extensively. (https://www.myjoyonline.com/full-text-anas-vs-charles-bissue-on-galamsey-deals/). We reiterate that those claims of demands for bribes to drop the Galamsey Fraud exposé, are false and without merit.

6. It's interesting that whenever these claims are made, those alleging fail to mention specific names nor produce evidence to buttress their claims. They don't also take bold steps to report such things to the law enforcement agencies for them to be dealt with per law. This should alert every watcher, that, these claims are wanton and must be treated as such.

7. In the video, a man in cornrow whom another claimed was Anas, was being accused of land grabbing. On humanitarian grounds, we wish to iterate that circulating videos of persons and tagging them as ANAS could put innocent persons at risk as they might get caught up and targeted in a case of mistaken identity. We further wish to state for the record that Anas Aremeyaw Anas, CEO of Tiger Eye has NEVER forcefully or illegally dispossessed anyone of his/her land and hasn’t been involved in an altercation as being purported. No court has found him guilty of illegal land expropriation.

Tiger Eye is fully aware that this particular allegation is being championed by one Kweku Annan who was sacked from NET 2 for professional misconduct. Suffice to say, Kweku Annan was exposed by Tiger Eye demanding bribes to spew lies about Anas Aremeyaw Anas (https://www.adomonline.com/fallout-from-12-radio-broadcaster-admits-taking-money-accuses-anas-of-bad-faith/). Subsequently, Tiger Eye took him to the National Media Commission (NMC) for redress on his allegations (https://www.graphic.com.gh/sports/sports-news/video-anas-petitions-nmc-to-investigate-hot-fm-presenter-for-unethical-media-practice.html), where he couldn't substantiate a single claim, leading to the issuance of a restraining order against him by the NMC. Once again, we challenge anyone with evidence of wrongdoing in the nature of unlawful expropriation of lands to proceed to the appropriate State agency for further action.

8. To reiterate without equivocation, Tiger Eye PI has NEVER, either through its agents or third parties, demanded monies from persons busted by Tiger Eye PI in the cause of our work, including the Number 12 and Galamsey Fraud exposés for the stories to be dropped. Per the internal operating procedures and integrity mechanisms within Tiger Eye, it's IMPOSSIBLE for any of our agents to demand bribes to drop a story. The sheer frivolity and incoherence of these allegations have been exposed times without number by Tiger Eye PI.

9. Tiger Eye PI, has at all times, after its investigations, taken extra steps to assist relevant State authorities to investigate the findings of our investigations. Anas Aremeyaw Anas has testified in courts, has been cross examined, and has been a subject of multiple suits for his works. None of these suits, since the over two decades of dedicated service to uncover crimes, has been successful.

10. We challenge anyone with evidence of crime against Anas Aremeyaw Anas, to without hesitation, make same available to the relevant State authorities.

11. Tiger Eye PI remains unwavering in its commitment to fight graft and crimes using sting operations (Anas principle), and absolutely nothing, be they threats or baggage of spurious allegations, will stop us from holding duty bearers accountable in the interest of God and Country.