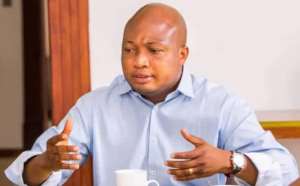 The Member of Parliament (MP) for North Tongu Constituency, Samuel Okudzeto Ablakwa has reacted to the announcement that the rate for Value Added Tax (VAT) will be increased in 2023.

According to him, he is shocked that President Akufo-Addo who led a demonstration against the introduction of the tax in the late Rawlings regime is the same person who is now increasing the rate.

"A terribly bitter 2023 budget. Despite current excruciating cost of living crisis, the Akufo-Addo/Bawumia/Ofori-Atta govt proposes to increase VAT by a staggering 2.5%. They are also imposing a complete ban on all public sector jobs. This isn’t the news we hope for on a day we wish to be in high spirit to support our gallant Black Stars.

“Who could ever have imagined or predicted that Nana Addo Dankwa Akufo-Addo who led the fatal 1995 Kumepreko demonstration against the introduction of VAT under President Rawlings which tragically claimed the lives of Ahunu Ahonga & 5 others would today be increasing VAT by 2.5%,” Samuel Okudzeto Ablakwa posted on Facebook.

The increment of VAT by 2.5% was announced by Finance Minister Ken Ofori-Atta on Thursday, November 24, when he presented the 2023 Budget and Economic Policy Statement of the government.

During his presentation, the Minister disclosed that the budget is anchored on a seven-point agenda aimed at restoring macroeconomic stability and accelerating economic transformation.

“To aggressively mobilise domestic revenue we will among others increase VAT rate by 2.5% to directly support our roads and digitization agenda,” Ken Ofori-Atta told Parliament today.

Currently, the standard VAT rate is 12.5%, except for supplies of a wholesaler or retailer of goods, which are taxed at a total flat rate of 3%.

You’ve been a dependable husband – Lordina celebrates Mahama...
42 minutes ago