Unbelievable, you now increase VAT after protesting it under Rawlings — Ablakwa jabs Akufo-Addo 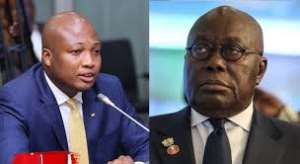 He is amazed that President Akufo-Addo can now see the benefit in the evil he once prayed against.

In 1995, Mr Akufo-Addo led some Ghanaians to protest the introduction of VAT under former President Rawlings's administration, a protest that later turned violent and even recorded some incidences of death.

On that count, the legislator said in a tweet on Thursday, November 24, that he is very shocked about the President’s U-turn.

“Who could ever have imagined or predicted that Nana Addo Dankwa Akufo-Addo who led the fatal 1995 Kumepreko demonstration against the introduction of VAT under President Rawlings which tragically claimed the lives of Ahunu Ahonga & 5 others would today be increasing VAT by 2.5%,” he wrote.

Reading the 2023 budget statement and economic policy in Parliament on Thursday, November 24, Mr. Ken Ofori-Atta, the Finance Minister, announced that there will be a 2.5 per cent increment in VAT effective 2023.

2023 budget: Expenditure cuts are just a recycle of broken p...
15 minutes ago