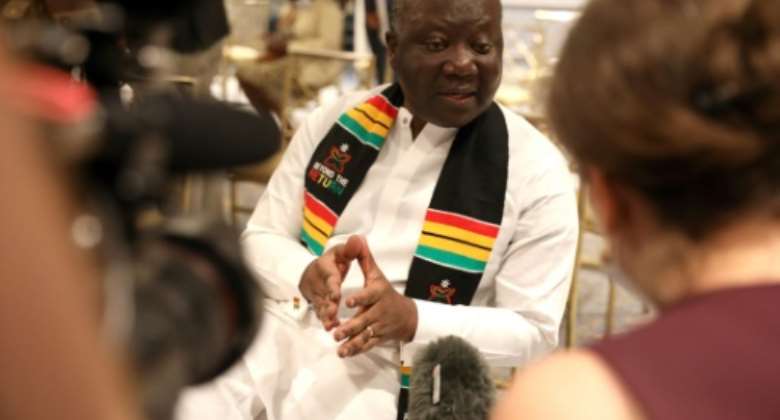 Finance Minister Ken Ofori-Atta has been under pressure from lawmakers over his fiscal management. By Monica Schipper (GETTY IMAGES NORTH AMERICA/AFP)

Ofori-Atta is facing calls for his dismissal as the West African state battles an economic crisis, with inflation at more than 40 percent and the cedi currency falling sharply.

Ghana hopes to secure up to $3 billion in IMF credit this year to shore up public finances after the government initially said it would not need to go to the multilateral lender.

"The challenges we face are daunting," the minister said in a statement to lawmakers. "I, therefore, ask all of us to play a constructive role in getting our nation back on track."

To increase revenues, the 2023 budget will raise value-added tax by 2.5 percent to 15 percent. The so-called E-levy on electronic transactions will be reduced from 1.5 percent to 1.0 percent in a bid to encourage more transactions.

The government will also freeze hiring of public workers for next year.

Ghana, a top cocoa and gold producer, also has oil and gas reserves but its debt service payments are high and its revenues low. Like the rest of Africa, it has been hit hard by economic fallout from the global pandemic and the Ukraine war.

Since the start of the year, the cedi currency has depreciated more than 53 percent. That compared to an average seven percent average annual depreciation between 2017 and 2021, the finance minister said.

The local currency's depreciation against the dollar has increasing Ghana's foreign debt stock by 93 billion cedi or $6 billion this year alone, the minister said.

He said the government would start a debt exchange programme but did not give details of how that would happen.

Earlier this year, President Nana Akufo-Addo reversed his government's position and said the country would go to the IMF for help.

Critics have questioned what austerity measures may have to accompany any loan deal. Ghanaians already struggling with high costs of living.

Ofori-Atta said the IMF talks had made "substantial progress", with agreement on "fiscal adjustment path, debt strategy and financing".

The government is under increasing pressure over the country's economic woes and Ofori-Atta faced an enquiry from lawmakers last week over his financial management.

Speaking in parliament on Friday, he apologised to Ghanaians for the struggles they faced.

Earlier this month, Akufo-Addo fired the government's junior finance minister, Charles Adu Boahen, over graft allegations after he appeared in a documentary on illegal gold mining.