Aisha Huang’s trial: Witness denies testifying to save himself from investigations 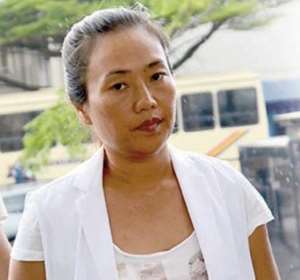 The third prosecution witness in En Huang's trial at an Accra High Court has denied testifying to save himself from further investigations and the charge of engaging in illegal mining.

Nana Sarfo Prempeh, a Director of Volta Resources Limited, a company tasked to undertake exploration in some concessions in the Ashanti Region, said: “I reject that accusation. I am here to give evidence to ensure that justice is done to the perpetrator (En Huang) who illegally mined from the year 2015 to 2017.”

Nana Prempeh accused En Huang of causing “wholesale damage” to the livelihood of farmers whose farm produce were destroyed and the fact that she also caused damage to the water bodies in the Ashanti region thereby denying residents clean drinking water.

The third prosecution witness was answering questions under cross-examination administered by Miracle Attachey, counsel for Aisha Huang, the alleged galamasey queen, standing trial among others for engaging in illegal at Bepotenten in the Ashanti Region in the year 2017 and re-entering Ghana though prohibited.

En Huang aka Aisha Huang has pleaded not guilty to the various charges and the Court presided over by Mrs Justice Lydia Osei Marfo has remanded her into lawful custody.

Defence Counsel (DC): Is it because investigations were against Volta Resource that you are eager to give evidence in respect of a case which does not have any co-relation to your company?

Witness: It is wrong. I am sitting here today and giving evidence against En Huang because she was specifically engaged in illegal mining in Volta Resources Concessions.

DC: Have you ever met En Huang?

Witness: Yes. I know En Huang to be engaged in illegal activities. En Huang makes appearances to claim seized machines on each occasion that Volta Resources had an encountered her.

DC: Have you met En Huang in person before?

Witness: I met her in October 2015 when four of her excavators were seized on the concessions of Volta Resources by Law Enforcement Authorities and same were deposited at the 4th Infantry Battalion in Kumasi.

DC: I put it to you that En Huang does not own any excavator or mining equipment as alleged by you?

DC: There is no evidence that En Huang owns any seized excavator.

Witness: I disagree. I have a pen drive which has media reports of series of demonstrations carried out by some residents of Gyaaman and Bepotenten, following illegal activities of En Huang.

DC: Have you been present in person in all these incidents of alleged seizure of mining equipment and appearance of En Huang?

Witness: In some instances, I was present and in other instances I was not present.

DC: You were recently arrested in respect of the operations of your company?

Witness: I have never been arrested. I was only invited by the state Security Investigative Authorities, and I gave statements to that effect.

The matter has been adjourned to November 29.