The Beggars Have Lost All Hope In Us (2) 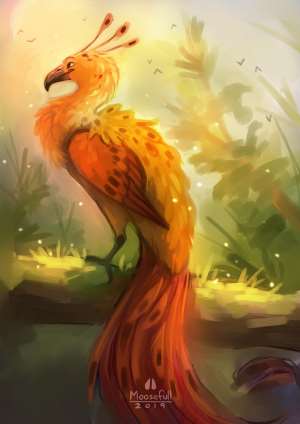 No Denouement, Just Comedy
Our conversation last week reminds me of a certain Efo and Sister Abena—two particularly great people I had the singular honour of witnessing some time back. The facts of the matter are simple—the subject matter was a hen. Efo, holding on tightly to this hen, and walking briskly to his kiosk apartment, said that hen was his. Sister Abena, who had managed to wrangle it out of his hands, and had immediately headed for what can only be said to be her kiosk apartment too, said, no, that hen was hers. These forceful turns at claims to possession left the poor hen screaming for dear life. The screeches of a hen, that was the only real, decipherable communication that ensued on that fateful day. Because Efo and Sister Abena both chose to conduct their quarrel in their own respective languages. Efo spoke Ewe; Sister Abena spoke—you guessed it, Dagarti—I’m kidding, Twi. The shop owner before whose shop I was, begrudgingly purchasing a few items, brought this scene home with her closing commentary—laughing fondly, she said, “Efo and Sister Abena will kill me ooo—arguing in two different languages…” There really was no middle ground in sight that day.

Please don’t expect any cyclical pay off with this anecdote right up here. It has no deeper meaning—as perhaps we tend to do with our anecdotes over here in this column. There is no foreshadowing here; there is no allusion to a person, place, thing, or event—present or historic—to be expected. It is not intended as a comedic throw-away having a twisted end of significance—owing perhaps to the fact that its likeness has ever been witnessed in history. So no, this is not intended as a reference to say, the infamous Guinea Fowl War of Ghana’s not-so distant past. We have no need to travel that far back into history today. This anecdote is intended not as a reference to the disagreement characteristic of our human ecosystem, but rather, an allusion to the oftentimes noble qualities characteristic of us…in this particular case, the quality called trust.

You do realise that I just made mention of a free-roaming hen, don’t you? In this day and age when the prices of meat are double what they were a few months ago… In this day and age when the price of eggs—boiled, un-boiled, or fried—are almost double their prices just a few months ago… In this ‘hard’ era of ours, you find fellow Ghanaians leaving their pricey, prized possessions—goats, sheep, cows, chickens, etc., still roaming about, free-range. This is a major win for our society, is it not? It signals trust, does it not? I, for one, find my faith in humanity restored… That in this economic era, when it costs an arm and a leg to buy a wing and a thigh of chicken meat, fellow Ghanaians trust one another enough to leave their livestock to roam free. But that’s beside the point…

I Know You Already Know This
Egg is graciously 3 Cedis now. It’s true, sika mp3 dede—so let’s not say this too loudly. But one boiled egg is famously 3 Cedis now. The same Waakye combination that one bought for 9 Cedis last year, was bought for 11 Cedis at the beginning of this year, and 17 Cedis three weeks ago. This week, it’s 24 Cedis. You ask the Waakye seller to sprinkle on a ‘few’ lettuce here and there, and she tells you she no longer sells “salad” for 1 Cedi—“It’s 2 Cedis now”. Don’t ask me about Gob3—I suspect you have your own issues with the prices of Gob3—but strangely, my system and that meal do not get along. So, I am not particularly conversant with its inflationary trends. It’s waakye that has gotten me, my brothers and sisters. At this point, you do not attempt understanding the metrics adopted by these sellers. Please do not try calculating along with them when it’s time to pay, because chances are that you are not yet conversant with the ‘new maths’. What you must know is that the days of the ‘old maths’ are behind us. One plus one can add up to five. You just humbly say, ‘I believe’ when these prices are mentioned, and then you pay up. But this is all totally beside the point…

Sea Shanties of the Heroic Sailors
I have been pondering over nations and tribulations recently.

On the global stage, whenever there are hardships, there is always a narrative of winners and losers that ensues. You know what they say about calm seas and the sailor, right? Calm seas never made a skilled sailor. I mean, this makes perfect sense, does it not? Because isn’t it only by preparing for extraordinary circumstances that we become extraordinary people? And won’t we be only so pushed to prepare for such extraordinary circumstances, only when we actually get, at least once in our lifetime, the pleasure (or displeasure—depending on our philosophical leanings) of actually experiencing these extraordinary circumstances? Indeed, it comes as no surprise to find nations fitting perfectly into this sailor/calm seas analogy. Challenges coming in the forms of conflicts (internal and external), natural disasters, outbreaks, etc., are endemic of the human ecosystem—and consequently, characteristic of nationhood. They are as much a fact of life as blood is to the human body.

So then, being bound to happen as these events are, if they actually do happen, what becomes of nations? If that which is feared the most happens to nation(s), what becomes of said nations? Bad begets bad; good, good—that’s pretty straightforward, is it not? So bad events beget for nations, bad outcomes; and good events, good outcomes—this is pretty straightforward, isn’t it? It’s interesting because straightforwardness does not necessarily mean truth—and our human experience shows us this to be true. There are nations who manage to turn bad events into good outcomes. There are sailors who defeat the storm by not only committing the act of surviving, but of thriving—of soaring. And there are nations that just make do; many of them, too, drown.

On the global front, whenever widespread difficulties occur, experience shows us that what ensues is this: there are winners, and there are losers. Some nations come out of wars as superpowers; some find themselves during global pandemics as ultimate winners. And others do the expected—they get caught in the traps of failure, as envisaged by the gods of woes when they laid those destructive traps. We haven’t figured this one out yet, have we?—the matter regarding challenges: whether they be punishments meted by lesser gods or opportunities afforded us by God. Whatever the case may be, this fact remains: in every challenge, there characteristically lies opportunities. And once again, when it comes to nations, we have a wealth of experience in that regard—nations who have found manure out of pure crap. (Excuse the language, but desperate times call for desperate language). There have been nations who have managed to consistently turn the worst of situations into sheer advancements.

These are the crème de la crème we are talking about here. Over here in this column, we have always tried our best to paint all nations in very realistic light. To whom lacerations are due, we give their due; to whom praises are due, we go all out in praise of. So much so that sometimes those to whom we just gave lacerations, we turn around and give praises. There is no shame in that.

Having been doomed to mediocrity and lowliness for so long, we have the tendency to project our mediocrity and lowliness to the rest of the world. You know what they say, “S3 w’owu aaa wo se y’ewu”—which literally translates as ‘when you are dying, you say we are dying.’ The same situations—global situations—tend to reap different results for different nations in the short, medium, and long term. Perhaps our growth as a nation can only ensue after, among many other things, we commit the brave act of ripping off this mask of self-imposed illusion to see reality as it is. And the reality is: there really are nations who—through various means; sometimes savoury, other times unsavoury (the former is our principal focus in this series)—tend to find themselves at their very best when faced with challenges. There are nations who come out of these challenges stronger than ever before. There are countries who sail skilfully and perfectly in storms.

Next week, for a change, we will compare ourselves with the very best of the world. Having abased ourselves to the ‘losing’ and ‘mediocre’ teams for so long, next week, we will dare to dream—by comparing ourselves with the best sailors of the world. That’s what hunger does to some people, you know… Instead of humbling them, these people find in hunger, an inspiration to soar—or sometimes, just to brag. I trust we will be able to rise to this challenge—the former that is. Soaring.