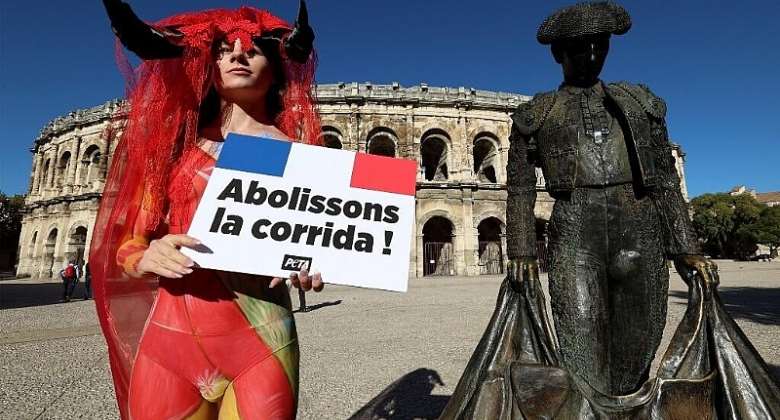 As France's parliament prepares to debate banning bullfighting outright, its defenders and opponents are equally passionate in their arguments for and against the practice.

Bullfighting is already outlawed in most of France. Article 521-1 of the penal code punishes animal cruelty and abuse with a three-year prison term and €45,000 fine.

But ten departments in the south and south-west benefit from an exception on the basis that bullfighting is an "uninterrupted local tradition".

An estimated 160 to 200 bullfights, known as corridas, are held in those areas each year, with around 1,000 bulls killed in the ring.

Aymeric Caron, an MP with the hard-left France Unbowed party who was elected on his campaign promise to try to end bullfighting, has tabled a bill to remove the exemption, allowing for a countrywide ban.

While a special parliamentary committee last week rejected a ban, on Thursday MPs will debate and vote on bullfighting for the first time ever.

Caron and other opponents say it's a barbaric and immoral practice which has no place in a modern society concerned about animal welfare.

They appear to have public support, with a recent survey showing around 75 percent in favour of a ban on bullfighting.

'A show based on animal suffering'

Each 20-minute combat, in which a matador faces off against a 400 or 500 kg bull, is a carefully crafted spectacle in three acts.

Praised as an art form by its fans, there's no denying it involves cruelty.

In the first act, an armoured man on horseback known as the picador weakens the animal by stabbing it in the neck with a long spear. In act two, the matador's assistants – known as banderilleros – thrust spiked harpoons into its back.

The spectacle culminates in the estocade, when the torero delivers a fatal blow by plunging his long metal sword through the upper part of the animal's back to reach its heart.

"Technically the matador's sword cannot reach the heart so at best it will section a large blood vessel around it, meaning the animal dies slowly of internal haemorrhaging," animal rights campaigner Sophie Maffre-Baugé told RFI.

"All of this is applauded," she continues, "so it's really a show based on animal suffering. It's extremely barbaric and in 2022 we have to free ourselves of such cruelty."

Unlike Caron, a northerner who admits he's never been to a bullfight, Maffre-Baugé is from the southern town of Béziers where corrida culture remains strong.

"History is moving in this direction," she argues. "As a civilisation we're making progress, we cannot continue in France to say that bullfighting is acceptable."

A particularly gruesome video of a bull writhing in the ring as a knife is twisted in its head has been widely shared on social media.

But aficionados, as bullfighting fans are known, say this is not the norm.

At a recent bullfighting festival in Vauvert in the Camargue, I saw the men known as puntilleros – armed with small daggers, or puntillas – moving in quickly to kill the animal with one or two sharp stabs. It was not pleasant viewing, but it was rapid.

"Spectators demand the bull's death be clean and quick," says Yves Lebas, president of the Arles Bullfighting Academy, who was introduced to corrida as a child growing up in Spain.

"They object when it takes too long. Toreros like to say they fear the wrath of the crowd more than the bull."

Max, a 71-year-old market gardener who's been coming to bullfights since he was eight, turns to me in disgust when he notices one of the bulls' horns has been sawn down too low.

"It's unpleasant and discredits the show," he says. "The bull should be able to defend itself, and injure the torero. It's part of what corrida is about."

Occasionally a bull will escape death altogether and receive a "pardon" for his bravery.

"Indulto!" ("be lenient"), the crowd in Vauvert shouted, waving white handkerchiefs to demand the president of the corrida spare the bull.

It was granted, and the bull returned to end its days in the campo, as the vast breeding and grazing areas of the Camargue are known.

Listen to a report on the bullfighting festival in Vauvert in the Spotlight on France podcast.

"Like any other mammal [the bull] has nerve endings, but the pain is more than compensated by the endorphins" released during the corrida, argues breeder Benjamin Cuillé, spokesperson for a collective of young defenders of the bullfighting tradition.

Caron's bill, however, cites a 2016 report by France's Order of Veterinarians confirming, without reserve, that bulls suffer during corridas.

Aficionados like Cuillé stress the wonderful life the bulls have before they enter the ring – with a hectare each to roam in, and plenty to eat.

"He's raised like a king for five years, we make him as beautiful and strong as possible," Cuillé told RFI. "And then he enters a corrida where he dies in a fairly quick way, and with acclaim.

"As a breeder I prefer him to die in glory, applauded by thousands of people than anonymously, in a slaughterhouse."

Breeders advance economic arguments too. These fighting bulls are bred specifically for corridas, and a ban would wipe out the race – taking breeders' livelihoods with it.

Bullfighting is a family affair in this part of the Camargue.

Lucas, a 12-year-old at the bullfighting school in Arles, saw his first corrida aged two, with his mother.

"It's a long family tradition, my great-grandfather did bullfighting with Miura bulls in the fields at night, my mother grew up with it. When I was eight she finally let me enroll at the school – it was the best day of my life," he grins.

He and his friend Lyzio say they're training hard to become professional toreros.

"Corrida means everything to us, we live and breathe bulls and bullfighting," Lyzio says.

Critics argue bullfighting is unfit for children, whether as spectators or as trainee toreros. Some even say it's a form of child abuse.

In 2019, Aurore Bergé, now head of President Emmanuel Macron's Renaissance group in the French parliament, tried in vain to table a bill banning corrida for under-16s.

Ysabelle Castor, a local councillor and president of the Alès bullfighting club, has come with her family, including a three year old. She says letting children watch video games is more shocking than corrida.

"I accept that people don't like bullfighting, it's their choice," she says. "But I'm not imposing it on them. So what I don't understand is that they want to impose their choices on us."

It's unthinkable, she says, that they would "force us to stop a part of our tradition, culture and identity".

While the passion still burns for some, there are signs the tradition is waning.

Caron's report cites a big drop in the numbers of people attending the feria in Nimes – one of France's biggest bullfighting events. From 130,000 spectators in 2010, the audience had fallen to 42,000 by 2019.

Aficionado Lebas recognises the tradition may die out, but says it has to be a natural death.

"If corrida has to disappear, then it will, but it shouldn't be through a ban, a law, because that would mean the north of France imposing its vision of a culture on the south.

"I don't think that's a good division, given the current climate in our country."

This story first appeared in the Spotlight on France podcast. Listen and subscribe.