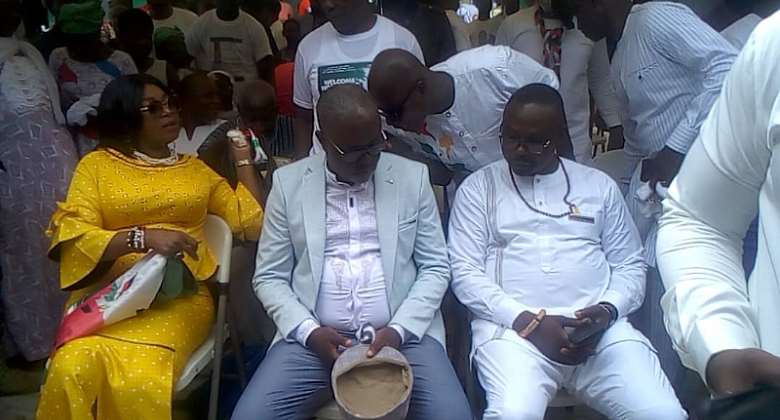 The newly elected Central Regional Chairman of the National Democratic Congress (NDC), Professor Richard Kofi Asiedu has encouraged members of the party to work extra harder to recapture power in 2024 to rescue Ghanaians from mismanagement that has brought untold hardships on Ghanaians.

According to him, signs were clearly written on the four corners of the country that the NDC would form the next Government to rescue Ghanaians from the present economic hardships caused by the clueless NPP Government led by President Akufo-Addo.

Professor Richard Kofi Asiedu said this at the durbar to honour him at Agona Kwanyarko. It also gave him the opportunity to express his gratitude to the party for the support he enjoyed in the regional elections to become the Central Regional Chairman of the NDC.

"Am grateful to the entire members of the NDC in the Central Region for your massive support before, during and after the Regional Elections. Am equally grateful to Agona Kwanyarko Nananom for their prayers for me as the son of the land.

"I acknowledge your support for me and pledged to work assiduously to ensure total victory for the NDC to form the next government. Little did I know that my small contribution towards the development of Agona Kwanyarko was being recognized by Nananom and my beloved NDC family. Am going to make NDC and my hometown Agona Kwanyarko proud.

"What I need from you is unity and cooperation for the tasks ahead of us, that is to win the 2024 general elections. I pray for unity of purpose to enable us achieve the needed development projects for Kwanyarko and its surrounding communities. Let all rally behind His Excellency John Dramani Mahama and Maame Pokua Sawyer and vote massively for them when the time comes.

"Agona Kwanyarko is blessed because we have a Member of Parliament, a District Chief Executive and a Regional Chairman who would spearhead the development of the community," he stated.

Accompanied by the Member of Parliament for Agona East Constituency, Hon. Queenstar Pokua Sawyer and some NDC Regional Executives, Professor Asiedu called for all hands on deck to enable the newly elected Regional Executives achieve the tasks ahead.

Member of Parliament for Agona East Constituency, Hon. Queenstar Pokua Sawyer said the entire members of the NDC in the Constituency would continue to support the Regional Chairman and his executives to propel the party into victory 2024.

Earlier on, Professor Richard Kofi Asiedu and his team paid a courtesy call on the Chiefs and elders of Agona Kwanyarko to seek their blessings and prayers and to show his appreciation to them.