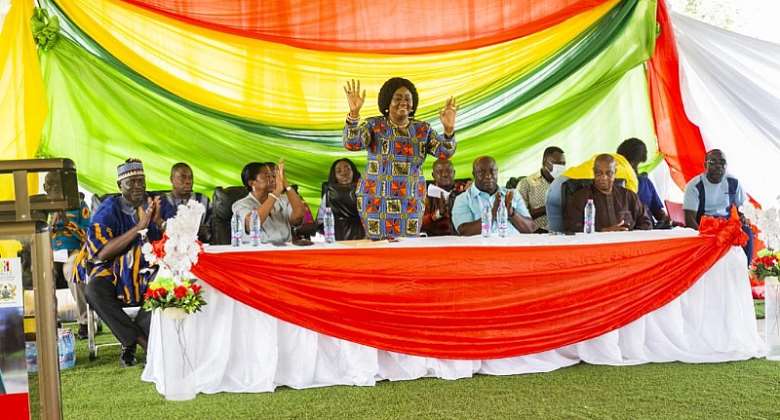 Hon. Barbara Oteng-Gyasi during the engagement reiterated that Government through the Commission is poised to ensure the good people of Prestea benefit from the gold mining business by establishing the Community Mining scheme in various communities in the Prestea enclave for the teeming youth to mine responsibly to protect the environment and generate personal income.

She indicated that the Ministry of Lands and Natural Resources and the Commission are negotiating with Future Global Resources(FGR), a mining company in Prestea to release portions of their concession to facilitate the setting up of Community Mining and currently, about four (4) sites have been identified to initiate the scheme.

She encouraged all persons interested in mining to register their concessions with the Commission to ensure the extension of support by the various offices of the Commission spread across the country especially regarding the allocation of the 'Gold Katcha' processing equipment introduced by the Commission to eradicate the use of mercury by Small Scale Miners. It was also intimated that to ensure responsible mining through effective monitoring, the Commission is planning to build an office complex in Prestea next year to boost the activities of the satellite office in Prestea.

MCE Hon. Isaac Dasmani (PhD) thanked the delegation for the good step being taken to roll out the Community Mining scheme in Prestea and entreated the miners to work hand in hand with the Commission, Traditional Authorities and the Municipal Assembly to register their concessions to ensure responsible and peaceful mining operations.

The Representative of the Small Scale Mining Association emphasized that their members do not mine in water bodies and forest reserves and were committed to collaborating with the Commission and Government to flush out illegal activity in these red zones.

Nana Nteboah Prah IV, the Divisional Chief of Himan/Prestea lauded the delegation for the engagement and encouraged them to push forward for the scheme to be launched to reduce unemployment rates and mining illegalities in Prestea and its enclave.

He admonished the youth to comply with the directives of the Commission and move from illegal mining to Community Mining and also proposed that Government reduce the concession allocations to Large Scale Mining Companies to ensure land was available for small scale mining.