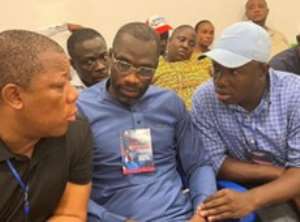 After serving as Chairman of the Revolutionary National Youth League for many years, Jefferson Tamba Koijee has gotten a mammoth mandate delegates at the party’s 7th Congress held on November 22, 2022 at the Congress for Democratic Change (CDC) headquarters in Congo Town, Monrovia.

Out of the 370 votes cast, Koijee obtained 276 while his closest challenger got 91 votes with three invalid votes.

In remarks following his election, he said the overwhelming mandate of the people comes handy in ensuring that he works to ensure that President George Manneh Weah gets another term as President at the ensuing 2023 polls.

According to him, that would underpin the sustainability of the many people centered initiatives including the tuition free scheme at all public universities and digital learning; WASSCE fees payment program; roads construction and other development programs continue the trajectory of progress the country is presently enjoying.

During his tenure as Chairman of the National Youth League, Mr. Jefferson Tamba Koijee raised the standard of politicking in the largest auxiliary of the ruling establishment while setting himself a part as the most influential young man in Africa.