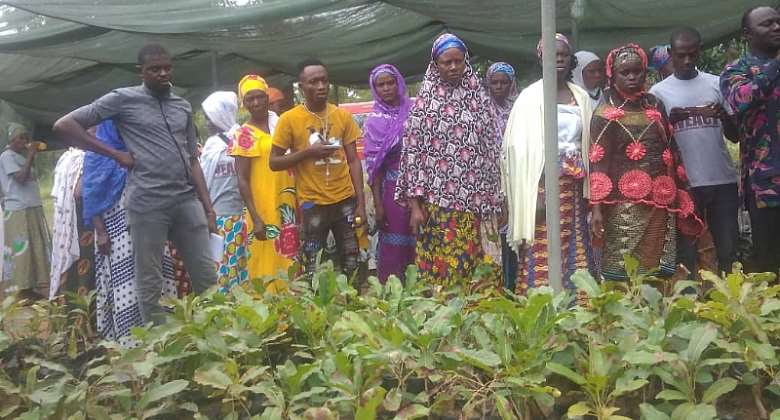 The 40 women were made up of members from the various hairdressers and beautician associations, provision store managers, restaurants and bar owners and women who deal in cosmetic products, among others.

The Entrepreneurship Empowerment Program was the first of its kind in the region that blends practical work experience with academics to equip beneficiaries with the requisite knowledge and skills to be able to excel in their businesses.

It was jointly executed by the Taimako Leadership Institute and the Business College International (BCI), another leading private business SHS in the Northern Region.

The Former Regional Director of the Ghana Education Service for the Northern Region and Guest Speaker Alhaji Haroon Cambodia has urged women to make themselves useful economically to help reduce domestic violence and abuse against them.

According to the former GES Director, most men abuse their wives because they (the women) do not add economic value to the lives of their men or spouses, hence the lack of appreciation and respect for them.

"If your man wants Gh¢20.00 cedis today and you the woman is able to give him, do you think if you wrong him tomorrow he will beat you, he will never beat you because he knows if he does and need Gh¢20.00 again tomorrow, you won't give him, so he will respect you and won't abuse you," he said.

He also called on men to stop molesting their wives and rather invest in them so that they can become useful to themselves and their society.

Alhaji Haroon was optimistic that the knowledge gained by the 40 women would help to empower their businesses, their families and society.

The graduation was attended by friends and family of the graduands, CEOs, private and public agencies, business associations, students and the public.

The Director of the Institute and owner of the Business College International, Alhaji Ibrahim Shamsudeen Taimako, in an address, said the Taimako Leadership Institute incorporated entrepreneurial training into what the BCI was already doing to help women in appreciating themselves, improve their businesses and also support to develop other women in the society.

"To this end, the BCI developed the program of study includes but not limited to Marketing, Human Resource, Business Communication and entrepreneurship, here, the participants are given in-depth knowledge of the above as it pertains to their skills as well as industrial exposure by engaging seasoned entrepreneurs on the field," he said.

He noted that women were good managers of resources but what was needed was encouragement and support from their spouses and society to be able to grow their businesses.

"BCI believes that the woman in practice is exemplary, well motivated and with great passion. All she needs really is a fine-tuning and sharpening of her Strength and Weaknesses and then society is good to go," he stated.

The training, he said, was free of charge, but appealed to both private and government agencies who can be of help, to lend their support so that they could reach out to more women.

The ceremony was attended by friends and spouses of the graduants, Sector players, Civil Society Organisations, Ghana Progressive Hairdressers and Beautician Association, the Ghana National Tailors Association, students and the public.

He also urged women entrepreneurs in the region to take advantage of the program to help improve their businesses and contribute to the development of their societies and Ghana at large.

The President of the Progressive Hairdressers and Beauticians Association, Eunice Agbeko, in remarks, thanked the founder of the BCI and the Taimako Leadership Institute for the knowledge given to their members who partake in the program.

She also urged the government to roll out initiatives that will benefit the women entrepreneurs since they formed the majority of Medium, Micro and Smallscale Enterprises (MSMEs) in the country.

Some of the beneficiaries, in an interview, also expressed gratitude to the Taimako Leadership Institute for empowering them to help grow their businesses.

The Training was funded by the Taimako Leadership Institute in partnership with the Business College International(BCI).

The beneficiaries were taken through courses such as human resources management, business communication, and entrepreneurship among others.