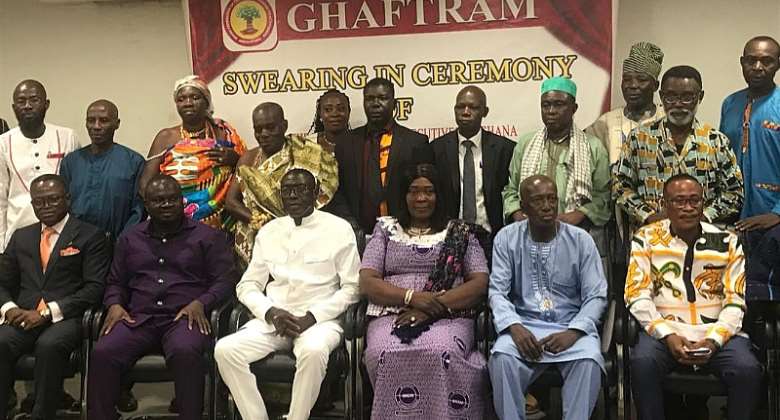 The Ghana Federation of Traditional Medicine Practitioners (GHAFTRAM) on Tuesday, November 22, sworn into office 22 newly-elected executives to take the place of the outgoing leaders.

At a short ceremony held at the Ministry of Health Conference Room at Ridge, Prof. Samuel Ato Duncan was sworn in as the new president of GHAFTRAM for his tenure to officially commence.

The new president is taking over from Mr. Kojo Odum Eduful who successfully served two terms, the first team to achieve that feat in the history of the Ghana Federation of Traditional Medicine Practitioners.

The new president, Prof. Samuel Ato Duncan was sworn into office in the presence of members of GHAFTRAM and officers of the Ministry of Health alongside 21 other elected executives.

Delivering an address after the swearing-in ceremony, Prof. Samuel Ato Duncan underscored the importance of traditional medicine, insisting that it has the potential to lead to the attainment of quality health delivery, reduce the unemployment burden in the country and create wealth.

He congratulated the outgoing executives of GHAFTRAM and all other past executives for doing an excellent job to get the federation to where it is at the moment.

Prof. Ato Duncan disclosed that his ambition is to ensure herbal medicine becomes an important commodity to the country to the level that traditional medicine can be exported on a large scale to earn the country foreign exchange

To succeed, he said he will work with his executives on what he terms the ‘green gold agenda’.

“I will help find solutions to the challenges confronting the country. This is practical, it’s not just talking. We are ready to help redeem the crisis Ghana is facing.

“We will pursue the green gold agenda. If gold and Cocoa have failed in turning the economic fortunes of the country then we must turn to the green gold. When I say green gold what I mean is we have traditional medicine that we can package properly and sell for deprived exchange to benefit our country,” Prof. Ato Duncan explained.

He noted that immediately after assuming office, he will begin working with his executives to work on how to come up with a plan to execute the ‘green gold revolution’ to ensure Ghana earns billions from traditional medicine through exports.

In his closing remarks, Prof. Ato Duncan called on all GHAFTRAM members and stakeholders to help him and the newly elected executives to ensure his tenure as president is successful.

Representing the Minister of Health, the Director of the Traditional and Alternative Medicine Directorate (TAMD), at the Ministry of Health, Dr. Mrs. Anastasia Yirenkyi commended GHAFTRAM for the transfer of power in a transparent and peaceful manner.

In addition, she admonished the new executives to get to work and ensure their contributions will make an impact that will be felt 20 years from now.

“I want to say that you have done so well and congratulations on behalf of the Minister of Health and his two able deputies for a very good job done.

With a lot of confidence in traditional medicine, she added that Ghana needs to prioritise the work of GHAFTRAM if indeed that country wants to move beyond aid.

“In Ghana, if we want to achieve a Ghana beyond aid our focus must be on traditional medicine,” Dr. Mrs. Anastasia Yirenkyi said in her address while adding, “My confidence is in the new leadership together with the old leadership that Ghana is going to provide jobs through traditional and alternative medicine.”

As chairman of the swearing-in ceremony, the President of the Ghana Journalists Association, Mr. Albert Kwabena Dwumfour congratulated the new Ghana Federation of Traditional Medicine Practitioners president and all the other executives for their new roles.

He assured that the GJA is ready to support the work of GHAFTRAM through needed publicity.

He urged the new GHAFTRAM executives to adhere to every rule and strive to change the bad perception people have about traditional medicine in the country.

"As the country’s new gatekeepers of traditional medicine, I urge you as new leaders to adhere to the laid down rules. We have a lot of work to do when it comes to image branding. I know by God’s grace you will achieve positive results,” Mr. Albert Kwabena Dwumfour urged the new GHAFTRAM executives.