Suspected robber lynched at Offinso, his accomplice beaten to pulp 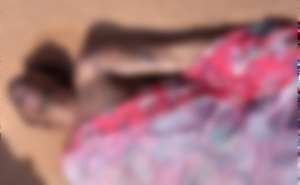 A man suspected to be an armed robber has allegedly been beaten to death by an irate mob at Offinso Amoawi in the Ashanti Region.

Another man believed to be the accomplice of the deceased robber was also beaten to near death before police in the area rescued him from the agitated mob.

The deceased, identified only as Illiasu, 24, was reported to have embarked on a robbery operation in the area with another young man.

Some witnesses who unanimously spoke to this reporter on Tuesday, November 22, 2022 said a close circuit television (CCTV) cameras in the house captured the suspects leading to their arrest by residents in the area few hours after the alleged robbery operation.

The angry mob first arrested one of the men captured in the video whose identity is yet to be known and subjected him to severe beatings. It took police in the area to save him. they would have ended his life.

Eliasu who had no idea what had occurred was allegedly caught by some residents and lynched.

Residents in the area bemoaned how some unscrupulous individuals are using devious means to attack them and steal from them in the community.

They have therefore called on police to intensify security in the area to help reduce attacks by armed robbers and other petty thieves.

Kudus becomes first Ghanaian player to score twice in a sing...
45 minutes ago