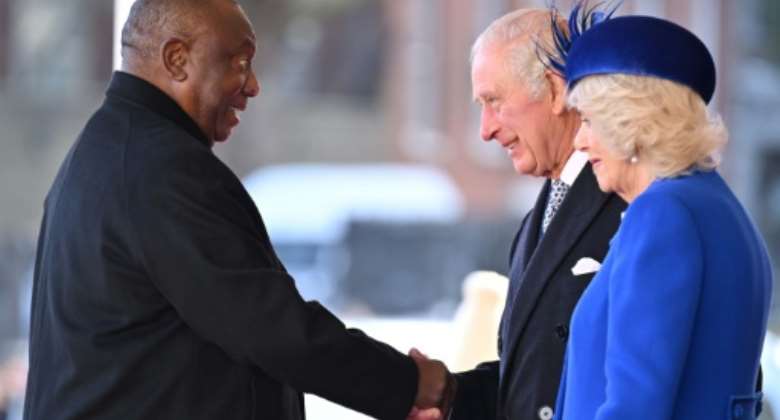 The two-day state visit is the first since Charles became king. By Leon Neal (POOL/AFP)

King Charles III on Tuesday welcomed South African President Cyril Ramaphosa to London for the first state visit of his reign, with climate change, trade and the Commonwealth expected to be on the agenda.

Charles and Queen Consort Camilla were joined by heir to the throne Prince William and his wife Catherine to greet Ramaphosa for a ceremonial welcome at Horse Guards Parade in central London.

The monarch and Ramaphosa inspected the guard of honour together.

The parties then travelled to Buckingham Palace -- the route lined with the UK and South African flags -- in a carriage procession escorted by mounted soldiers from the Household Cavalry.

The two-day state visit is the first since Charles became king following the death of his mother, queen Elizabeth II, in September.

It comes more than a decade after the last by a South African leader, when Jacob Zuma came to the UK in 2010.

For Ramaphosa, a protege of anti-apartheid icon Nelson Mandela, however, it also comes amid political difficulties and a threat of impeachment at home.

Ramaphosa and Charles inspect a Guard of Honour. By Yui Mok (POOL/AFP)

President Ramaphosa was last in the UK for queen Elizabeth II's funeral. By Jonathan HORDLE (POOL/AFP)