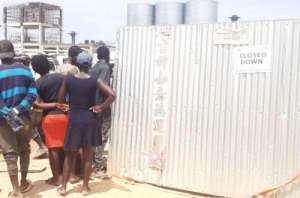 An Accra High Court has placed an injunction on the operations of Empire Cement Ghana Limited, operating within the McCarthy Hills enclave without a permit.

The injunction follows complaints by residents over potential health threats posed by the plant.

The McCarthy Hills Residents Association at a press conference last month accused the cement producer of operating without the requisite permits, an allegation which was denied by the company.

But the Court presided by Justice Boampong held that Empire Cement Ghana Limited had no permit from the Environmental Protection Agency to operate and ordered it to stop operations immediately.

The injunction on the company will be in force until the final determination of a suit by the McCarthy Hill Residents Association.

In June 2022, the Executive Director of the Environmental Protection Agency (EPA), Henry Kwabena Kokofu expressed disgust over the construction of the cement factory at Weija in Accra.

The factory, Empire Cement Ghana Ltd, according to the EPA Boss, was producing and distributing cement without authorization. He added that the cement company is operating beyond its permit.

According to him, the company was given a permit to produce cement bags only, but the EPA later found out that it was rather manufacturing cement.

He further disclosed that the company petitioned the Sector Minister, Abu Jinapor, accusing the EPA of victimisation and enforcing laws arbitrarily when the latter attempted to have the company closed down.