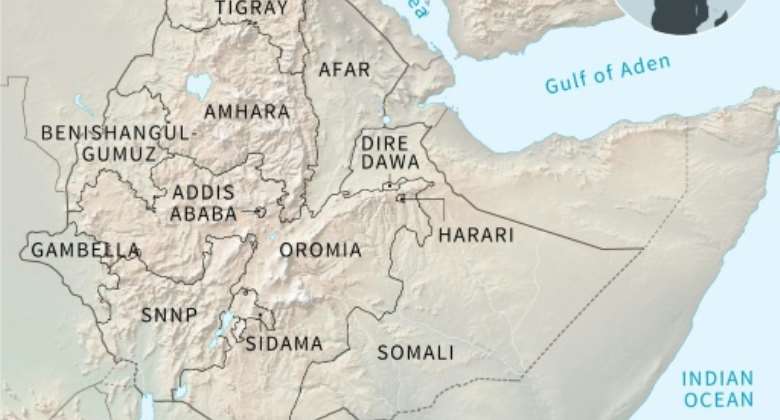 Mosaic: Ethiopia has scores of communities divided along ethnic and linguistic lines. By Simon MALFATTO (AFP)

Even as the rivals in Ethiopia's Tigray conflict have agreed to a ceasefire, reports of air strikes and massacres are emerging in Oromia, a region haunted by a long-running insurgency.

Following are the key issues surrounding the violence in Oromia, home to around a third of Ethiopia's 110 million people.

What is happening in Oromia?

The rebel Oromo Liberation Army (OLA) has exploited this growing resentment to swell its ranks in its years-long battle with federal and regional forces.

But the region is beset with other ethnic fissures too, particularly between the Oromo and the Amhara, the country's second-largest group.

A mosaic of more than 80 ethno-linguistic communities, Ethiopia has struggled to manage rival claims to territorial and political power.

Oromia neighbours nine of the country's 10 other regions, and many shared borders are prone to clashes.

"The Oromia conflict is both an ethnic conflict between the Oromo and the Amhara, and a struggle within Oromia between supporters of (Prime Minister) Abiy Ahmed's government and its enemies," said Ben Hunter, Africa analyst at risk intelligence firm Verisk Maplecroft.

"These complex dividing lines, combined with widespread misinformation, have made the Oromia conflict exceptionally opaque."

Unemployment and inequality are other drivers of conflict, said anthropologist Thomas Osmond.

Is the OLA gaining momentum?

Deemed a terrorist organisation by the government, the OLA was the armed wing of the Oromo Liberation Front (OLF), an opposition party that spent years in exile but was allowed to return to Ethiopia after Abiy took office in 2018.

The OLA, which is referred to as OLF-Shane by the federal government, then broke off from the OLF and has extended its reach in recent years.

"The OLA is not a pyramid-like organisation, but a rather loose set of armed groups that claim to be part of it," Rene Lefort, a historian specialising in Ethiopia, told AFP.

Estimated at a few thousand men in 2018, OLA membership has "likely... increased substantially since 2020", according to ACLED, an NGO which collects data in conflict zones.

With Abiy's popularity among the Oromo already low, the use of "excessive force... (by) federal forces has seriously exacerbated population discontent", ACLED said.

The June 2020 murder of Hachalu Hundessa, a pop star who gave voice to the frustrations felt by many in Oromia, led to street protests, with more than 160 people killed in the ensuing violence.

Oromo political leaders and opposition activists were also rounded up and detained in a sweeping government crackdown.

"Oromo nationalism... has intensified since 2018 because Abiy Ahmed was brought to power by an Oromo protest movement but has not yet delivered any substantial benefits for Oromia," said analyst Hunter.

Furthermore, "the war in Tigray pushed the federal government to arm hardline Amhara militias, who have since conducted attacks on Oromia civilians and thus driven (up)... support for the OLA."

Who is responsible for the massacres?

Human Rights Watch says it has documented summary executions and arbitrary detentions by pro-Abiy forces, as well as abductions and killings of local leaders and government officials by armed groups.

Western Oromia has also witnessed ethnic massacres, particularly in the Qellem Wollega and West Wollega areas, with the OLA and the government blaming each other for the violence.

The insurgents have accused pro-government militias of a hand in the violence -- a version supported by an Oromo MP from Abiy's own Prosperity Party, Hangasa Ibrahim, who said militias created by the regional authorities were responsible for killing Amhara civilians.

In June, OLA carried out an attack on the capital of the neighbouring Gambella region.

The state-affiliated Ethiopian Human Rights Commission in September accused security forces of killing dozens of civilians in Gambella on suspicion of collaborating with the insurgents following the June 14 attack.

Compared to the Tigray war, the conflict in Oromia has drawn scant international attention but still poses a threat to Africa's second most-populous nation.

But, he said he could not see how federal or regional forces allied to Abiy could overcome it.

Osmond said the insurgency could "weaken the government and risks fueling a spiral of inter-ethnic hatred" in Ethiopia.

A drawn-out conflict in its wealthiest region risks "accelerating the disintegration already under way in the country," Osmond told AFP.