WHY I KILLED ‘YEYE BOY’-Rawlings Confesses 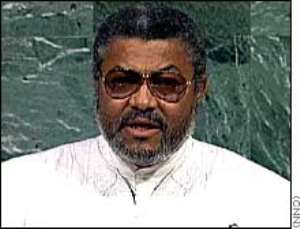 Several years after the series of bloodletting, atrocities and disappearances that characterised Jerry John Rawlings' military juntas, some of the motives behind the sinister acts are beginning to unfold, this time from the horse's own mouth.

The leader of the bloodiest regime in Ghana's history, Flt. Lt. Jerry John Rawlings, claimed that his main reason for ordering the execution of Torgbui Akakpovi Ahiaku, popularly called, Yeye Boy of Atidzive, near Abor in the Volta Region, as well as other traditionalists, was to demonstrate to their people that juju does not pay.

The former President and founder of the opposition National Democratic Congress (NDC), after nearly three decades of silence, was virtually compelled to blow off the lid at a press conference in his Ridge residence last week Thursday.

With no sense of remorse whatsoever, Mr Rawlings, an apostle of fetishism, boastfully said Yeye Boy in particular, was “killed to send a strong message to fetish priests that juju was a sham.”

According to Mr. Rawlings, the execution of the jujumen, who were suspects of ritual murder in their communities, was to let the people know that there was no salvation in juju.

At the conference, a female TV Africa reporter had wanted to know whether the country, and therefore the citizenry, was any safer now, than in the revolutionary days.

Obviously not satisfied with the responses from Victor Gbeho and other spokespersons like Dr Benjamin Kumbuor, the unrelenting lady reporter insisted on a specific answer to her question, which prompted the former president to tell the world, the 'hidden truth'.

Rawlings said, “Talking about the lady's question on safety, we talked of the murder of the judges and the punitive action that was taken, and I also talked about my brother's son….

When people commit ritual murders and we catch up with them and the chiefs and timber merchants, and we execute them right in their villages for people to think that juju has not saved them, then we are violent people?” he asked.

Yeye Boy, the fetish priest of Atidzive, near Abor in the Volta Region, was abducted from his home by armed soldiers in 1982 and bundled into a waiting military vehicle.

That was the last time his relatives saw, or heard of him.

A few days after his abduction from Atidzive, his charred, mutilated body was discovered in a bush along the Accra-Ho road.

He was not tried in any court of law or even military tribunal, and no official explanation had since been given for his execution.

However, there was the strong suspicion that it was part of the witch-hunting exercise embarked upon by the leadership of the PNDC.

Rawlings' chilling confession may now give his family the respite, as regards the sin of the once revered jujuman.

Dozens of vehicles and properties registered in Yeye Boy's name were looted, while several of his relatives and children were forced to go into hiding, after his sadistic murder.

Unofficial sources suggested human ritual, but his execution was not announced, as were the cases of the generals.

In the wake of the National Reconciliation Commission (NRC) two years ago, the children of Yeye Boy petitioned the commission and after thorough investigations, the committee recommended reparation and apology for his death.

Volume 1 (Chapter 8, part 5) of the report stated: “An apology is owed to the families of all those who were killed, as well as those who have disappeared and whose whereabouts, to date, are unknown.”

Volume One (7.4.3.3) also recommended that “Loss of life resulting from human rights violation-killings, disappearances, etc. gets a reparation of ¢20m-¢30m.”

Torgbui Akakpovi Ahiaku was the 111th person on the reparation list and his family is to be given ¢20m. Hundreds of fetish priests, traditional rulers, students and soldiers were murdered in similar manner, a number of whom were suspected of committing crimes as minor as indebtedness.

Yeye Boy's execution was one of the most chilling stories heard by the Justice Amoah-Sekyi-led NRC.

The Commission was informed by a certain Mathias Kudzo, who was at the time of the murder, a soldier with the Ho Mortar Regiment and a close Rawlings confidante, that he was part of the team that raided Yeye Boy's location after an order for the action was received from Accra.

The jujuman was rumoured to have been a voodoo consultant for Rawlings in the heady days of the revolution, but attracted his wrath when he was reported to have asked for the clothing of the junta leader.

As Bombardier Mathias Kodzo related, when a close friend of Rawlings heard about the request which he (Yeye Boy) had made, it was believed that he drew the attention of the junta leader to a rumour that the late General E.W.K. Kotoka, one of the architects of the 24th February 1966, had obliged to a similar request by the jujuman and paid dearly for it.

On hearing this, the NRC was told, Rawlings grew furious and allegedly ordered, “Go and bring the bastard”, whereupon his “hounds” charged on Yeye Boy, seized him and eventually subjected him to a gory death.

In fact, the whole of Atidzive suffered the wrath of the soldiers, who descended on the village to carry out the orders. Bombardier Kodzo, now a man of God, showed visible remorse for having taken part in that operation, when he took his turn before the NRC.

That was the closest Ghanaians got to knowing what had happened to Yeye Boy, whose abduction and subsequent death, like many others in the course of the so-called revolution, was shrouded in mystery.

My wealth exaggerated; it’s crass to define me by my wealth ...
38 minutes ago

We need peace in Bawku, we cannot make our children inherit ...
38 minutes ago