Civilians caught between rebels and army in east DR Congo 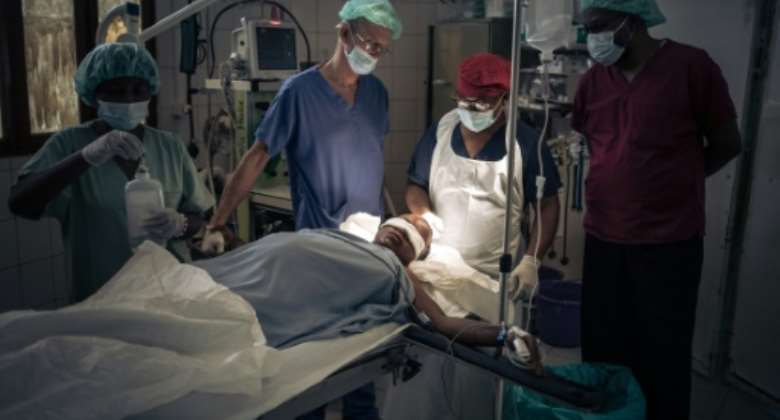 Rebecca Nzengi, 22 and pregnant, receives stitches to her head after being attacked by a 'bandit' with a machete. By ALEXIS HUGUET (AFP)

They came under fire several dozen kilometres north of the city and he died on the spot after his legs were blown off.

Twizere, 35, was severely wounded in the same attack last month.

"My legs were torn up, but the Red Cross was able to rescue me," she told AFP. "Everyone was running away from the bombing".

After the attack, a motorcycle-taxi driver loaded the pregnant Twizere onto his vehicle, and they both crossed the frontline separating the army from M23 rebels, on the main highway leading towards Goma.

Furaha Twizire has given birth to healthy twins since arriving wounded at the hospital. By ALEXIS HUGUET (AFP)

An ambulance from the International Committee of the Red Cross (ICRC) then picked her up about 30 kilometres (18 miles) from the city, an important commercial hub of one million people on the border with Rwanda.

Twizere, who has been receiving treatment for weeks, left five children behind.

Over 120 armed groups operate in eastern Democratic of Congo, many of which are legacy of regional wars which flared at the turn of the last century.

But the M23, a largely Congolese Tutsi militia, has staged a major comeback in recent months after laying dormant for years.

Its combatants have captured swaths of territory in the DRC's North Kivu province and are edging close to Goma.

The fighting has sent relations between the DRC and Rwanda into a nosedive, with Kinshasa accusing its smaller neighbour of backing the M23, something UN experts and US officials have also said in recent months.

In the murk of war, it is unclear how many people have been killed in the recent clashes.

At the hopital in Goma, only ten people have been admitted since the resurgence in fighting because of the difficulty crossing the frontlines. By ALEXIS HUGUET (AFP)

At Twizere's hospital in Goma, only ten people have been admitted since the resurgence of combat, according to Annekathrin Muller, a German nurse in charge of ICRC operations at the facility.

"They can't cross the frontlines," she explained.

"If a humanitarian corridor is opened, there's a risk that many wounded will arrive here," Muller added, noting that she was concerned about the number of amputations medics may have to perform.

Waiting for war to end

Rebecca, also pregnant, was stretched out in the hospital's operating theatre receiving stitches to her head.

The 22-year-old, pregnant with her second child, fled the fighting to a makeshift shelter in a muddy displacement camp north of Goma.

It was there that a "bandit" attacked her with a machete, Rebecca explained, before she burst into tears while recounting how her aunt died during her family's escape from the fighting.

Hospital staff are concerned about the number of amputations they may have to perform if a humanitarian corridor opens up. By ALEXIS HUGUET (AFP)

After her operation, Rebecca will recover on the same ward as Twizere, who has given birth to healthy twins since arriving at the hospital.

A neighbour of Twizere's is currently taking care of four of her other children. Another is receiving medical treatment himself after being shot in the shoulder.

Now a widow, Twizere will have to care for seven children alone.

"We no longer know where to live," she said, explaining that her house had been destroyed in the fighting.

"I'll wait until the war is over, only then can we go home."