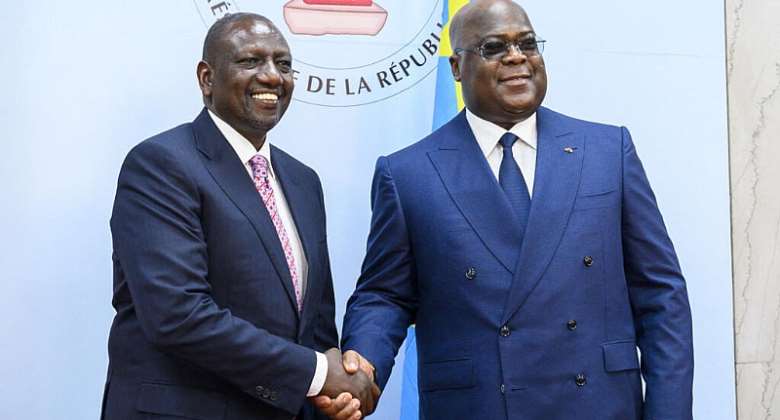 The DRC is fighting an armed rebellion by M23 militants, who have seized swathes of territory across in the North Kivu province and are moving closer to the region's main city of Goma.

Recently arrived Kenyan troops, deployed as part of an East African Community army, will "enforce peace on those who are hellbent on creating instability”, Ruto told journalists in Kinshasa on Monday.

“Without peace, no country or individual can have the space to prosper.”

The two leaders agreed to form a joint committee to elaborate the areas of cooperation focusing on security, trade and investment.

The largely Congolese Tutsi M23 was formed in 2012 to defend the interests of Congolese Tutsis – a group sharing the ethnicity of Rwanda's President Paul Kagame – against Hutu armed groups.

It captured Goma, the largest city in the eastern DRC, in 2012 before being driven out and going to ground.

But it re-emerged late last year, claiming the DRC had failed to honour a pledge to integrate its fighters into the army.

The fighting has reignited regional tensions, with the DRC accusing neighbour Rwanda of backing the militia.

Kigali denies supporting the M23, while accusing Kinshasa of colluding with the FDLR, a former Rwandan Hutu rebel group established in the DRC after the 1994 genocide of mainly Tutsis in Rwanda.