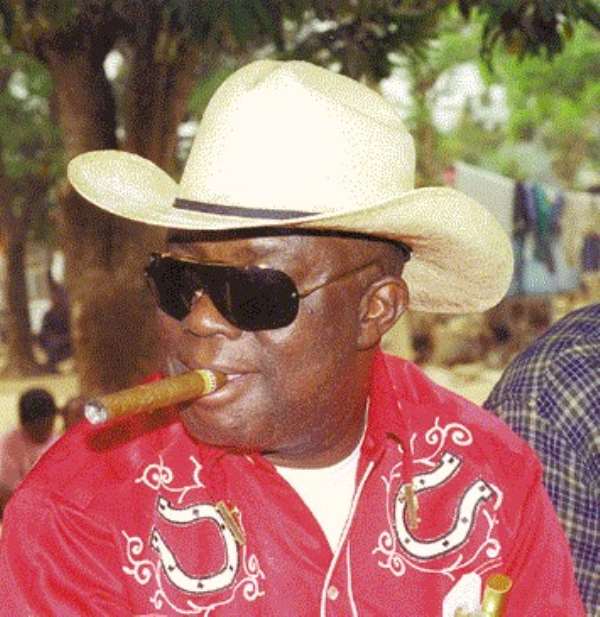 After A brief lull, Mr. Charles Kofi Wayo has sprung another circus act, sacking Alhassan Saeed, the General Secretary of the embryonic United Renaissance Party (URP). The general secretary however described the action as a sham, averring that it was rather the maverick politician who had been fired by the disciplinary committee of the political grouping.

The two had been engaged in a running battle over the ownership status of the yet-to-be registered political grouping.

Kofi Wayo had put also, the Teshie-Nungua constituency office, which doubles as the party's headquarters, under lock and key, driving away Ms. Francisca Laritey, the secretary at the place, for allegedly siding with the executives of the URP.

The container office was said to have been given to the party by one Mellon Kudjo, who was a friend of Kofi Wayo's.

Kofi Wayo was said to have insisted that the URP was his property; an assertion contested by the executives, especially the General Secretary.

According to a correspondence on the purported dismissal of the General Secretary titled, “Resolution To Fire An Interim Secretary For Misconduct”, signed by Kofi Wayo as leader, Sampson Sadjie, National Organiser, Nana Appiah Boateng, Eastern Regional Chairman and David Amansunu, Volta Regional Chairman, and without a date, the decision to fire the General Secretary was taken on 9th October, 2006 at an emergency meeting.

The decision, according to the correspondence, was informed by the officer's alleged flirtation with other political parties, as well as defrauding party members.

“On the 9th of October 2006, at approximately 10.00am, an emergency meeting was called by the interim national chairman of the URP to discuss the conduct of the General Secretary, for the violation of the party constitution, part four, page 13 'Cessation of Membership,” the meeting said.

Continuing, the correspondence noted that “the secretary was caught flirting with other political parties, disrespecting the party's philosophy, ideology and also using the party to defraud members”.

The correspondence stated therefore, that “a motion was tabled by the founder and leader of the party, Chuck Kofi Wayo, and was seconded by the interim chairman, Nana Kofi Mark Davis, after which an overwhelming vote was cast with over 2/3 of the members present voting to fire and replace him with a new member as secretary, as soon as possible.”

In his response, the General Secretary stated that Kofi Wayo and his group had misquoted the party's constitution, explaining that “Article 15(11) states that the party's general secretary shall notify the National Executive Committee for any misconduct or resignation of a party executive or member, for him/her to appear before the party's disciplinary committee for the necessary action.”

This stipulation, he said, was violated by Kofi Wayo, “who thinks he is the party's founder and owner. There is nothing like that in the party's constitution”.

According to Mr. Alhassan Saeed, the disciplinary committee of the party had ordered Kofi Wayo to appear before it at the Teshie-Nungua constituency office, but he had refused to do so.

The committee, he said, had therefore fired Kofi Wayo from the party. According to the General Secretary, Kofi Wayo was scheduled to come and answer queries pertaining to alleged corruption, fraud and misappropriation of party funds.

He said the signatories in the dismissal letter were unknown to the party and this could be ascertained at the Electoral Commission. “

Kofi Wayo, from this day, ceases to be a member of the party and nobody should deal with him as far as the URP is concerned,” he said.

“The party,” he said, “belongs to all Ghanaians who believe in its aims and objectives, and not a dictator, a loose talker and a conman.”

He appealed to the members and supporters of the URP to remain calm so that a necessary re-organisation of the party could take place “now that Kofi Wayo is no longer a member of the party.”

On his alleged flirtations with some elements outside the URP, he said he had been accused of dealing with John Boadu of the New Patriotic Party (NPP).

Mr. Chucks Kofi Wayo's immediate past theatrical was when he dragged the General Secretary, Mr. Alhassan Saeed, to the Nima Police Station, after accusing him of stealing his $500; an amount he claimed, had dropped from his pocket at his East Legon residence in Accra.

He also charged the General Secretary for allegedly failing to submit a report on ¢70 million he claimed to have given him to undertake party organisation.

He had earlier accused the acting Editor of Daily Guide, during a radio programme, of demanding ¢70 million to kill a damning story about him, and described the News Editor of the paper as a beggar; this was in reaction to a story about the confusion-rocked Golden Tulip Hotel meeting of the URP.

Kofi Wayo is a Nima-born who sojourned for many years in Chicago, US, before returning to Ghana, where he immediately jumped into the fray of Ghanaians politics.

Creating the impression that he was all for development to improve the lot of the Nima youth, he attracted a large following in this sprawling part of Accra where he was born and bred.

The hopes of the youth however, were soon dashed, as their idol dwelt more on talking than assisting them. He joined the NPP during the polls that brought the party to power but he failed to annex the East Ayawaso constituency seat to the party, losing to NDC's Dr. Mustapha Ahmed. Kofi Wayo, described as a loose-talker in many circles, is fond of hurling invectives at people who crossed his path.

He had also showed traits of inability to co-habit with others in the same political grouping, as evidenced in his NPP, PNC and the URP days.

The dismissal and counter-dismissal poses an interesting subject to followers and chroniclers of Ghana's political history, as the maverick politician flexes his muscles to lay claim to the ownership of the URP, perhaps in the mould of Mr. Jerry John Rawlings and the NDC.