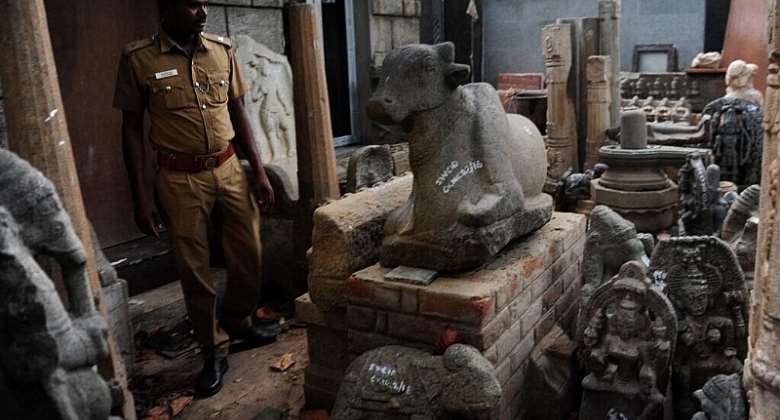 An Indian court has convicted Indian-American antiquities dealer Subhash Kapoor for looting treasures worth millions of euros in a crime spree that put a spotlight on India's art smuggling industry.

A judge this month ordered a 10-year jail term for Kapoor after convicting the US citizen and his five associates on charges of criminal conspiracy, theft and smuggling of 19 Indian artefacts worth €11 million.

“His empire was much larger than what the prosecution in India presented in the court as thousands of artefacts are linked to him,” a police investigator told RFI from the southern Indian city of Trichy, where the disgraced dealer is behind bars.

The court found that Kapoor headed a network that pillaged ancient sites in India, Afghanistan, Nepal, Cambodia and Pakistan. Using falsified records, he sold stolen items to wealthy collectors through his New York gallery, Art of the Past.

In 2011, Interpol arrested Kapoor in Germany and extradited him to India. The dealer unsuccessfully filed seven separate bail petitions in courts of Tamil Nadu state, where his trial began last year.

Kapoor was also indicted in the US for larceny, conspiracy and possession of stolen goods after art curators, lawyers and the police joined a probe called "Operation Hidden Idol" led by the Manhattan District Attorney's Antiquities Trafficking Unit.

It confiscated more than 2,500 relics linked to Kapoor and worth €137 million, in addition to the 19 stolen items he has been convicted for in India.

Kapoor has denied wrongdoing, even though police across two continents say they have piled up incriminating dossiers against the Indian-born smuggler.

Some believe Kapoor, 73, was a “small fish”. But US investigators argue that in terms of volume and value, the Manhattan dealer was America's most ambitious smuggler.

The US has sought his extradition from India, which has redoubled efforts to bring back Hindu and Buddhist religious idols and artefacts robbed from temples, protected ruins and archeological sites.

In 2016, the US returned to India statues and works in bronze and terracotta worth over €96 million at the time, saying that they were part of shipments linked to Kapoor.

Two years later, the US sent back two antique statues worth hundreds of thousands of euros that had been stolen from India and displayed in American museums.

The UK, Canada and Italy have also repatriated items that were spirited out of India.

Museums have also returned artefacts to Nepal, including the repatriation in August of a 13th-century wooden sculpture of a tree deity from New York's Metropolitan Museum.

“In the past our heritage laws have been weak, and India has been lax in going after stolen art and statues,” Kumar told media after Australia handed back 29 artefacts in March this year.

“There is also a perception that India does not care enough about bringing back her treasures,” he said.

India's National Crime Records Bureau has reported the recovery of 1,493 items out of 4,408 idols and antiquities stolen between 2008 and 2012.

Separately, the Culture Ministry has reported the theft of 101 priceless antiques from federally protected monuments between 2000 and 2016.

UNESCO estimates that nearly 50,000 objects were smuggled out of India between 1979 and 1989 alone. The UN's culture agency has underscored concerns about lax security at some of the 3,650 state monuments which include treasured ruins from prehistoric times.

Police officers argue relatively light punishment for robbing temples was not enough to drive away thieves.

“Our idols worth millions go missing, but the smugglers are fined just a handful of rupees if caught,” said one federal officer on condition of anonymity.