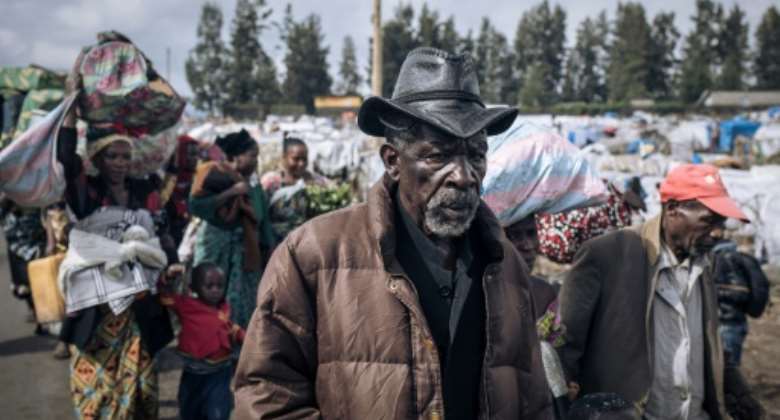 People displaced by the fighting in eastern DR Congo heading to Goma this week. By ALEXIS HUGUET (AFP)

International calls mounted for rebels to lay down their arms in the eastern Democratic Republic of Congo, where a lull was reported on the frontlines Saturday after several days of intense fighting.

Kenya's former leader Uhuru Kenyatta, who is mediating in the crisis, said Rwandan President Paul Kagame was ready to help in pushing the resurgent M23 militia to cease fire and pull back from captured territory.

Kenyatta is the East African Community's "facilitator" in efforts to restore peace and security in the mineral-rich east of the impoverished country where many armed groups are active.

The largely Congolese Tutsi M23 militia has seized swathes of territory across North Kivu and edged towards the region's main city of Goma in combat that has displaced tens of thousands of people.

The fighting has also reignited regional tensions, with the DRC accusing its much smaller neighbour Rwanda of backing the M23, something that UN experts and US officials have also pointed to in recent months.

"Kenyatta, in discussion with President Kagame, agreed on the need for an immediate ceasefire," Kenyatta's office said late Friday after a phone call between the two men.

"President Kagame also agreed to assist the EAC facilitator to urge the M23 to ceasefire and withdrawal from captured territories," it said in a statement in English.

Kigali denies supporting the M23, while accusing Kinshasa of colluding with the FDLR, a former Rwandan Hutu rebel group established in the DRC after the 1994 genocide of mainly Tutsis in Rwanda.

'No to Rwandan aggression'

For some Congolese, Kenyatta's statement about Kagame was a form of acknowledgement that Rwanda could indeed influence the M23.

"At last, Paul Kagame admits that his country is attacking the DRC!" lawmaker Solange Masumbuko said on Twitter.

Map locating key area of conflict between the Congolese regime and rebel groups in the east of the country. By Valentin RAKOVSKY (AFP)

Demonstrations against Rwanda and in support of the Congolese armed forces (FARDC) were staged on Saturday in several cities including Kinshasa and Bukavu in the east, with marchers chanting: "No to Rwandan aggression."

The United States, along with the Belgian, British and French envoys for the Great Lakes region also called Friday for the M23 to pull back immediately and cease hostilities.

They said in a statement that the resumption of violence since October 20 "undermines peace efforts and has caused further insecurity and significant human suffering".

They called on all parties to participate in a new round of peace talks scheduled for next week in Nairobi under EAC auspices, adding: ""All support to non-state armed actors must stop, including external support to M23."

Over 120 armed groups are active across eastern Congo, many of them a legacy of regional wars that flared at the turn of the century.

But it re-emerged late last year, claiming Kinshasa had failed to honour a pledge to integrate its fighters into the army, among other grievances.

Kenyatta visited eastern Congo earlier this week, saying there was a "humanitarian catastrophe" unfolding. "There is nothing that can be gained through the barrel of a gun," he told reporters.

On Friday, he also spoke by phone with UN Secretary General Antonio Guterres and appealed for the United Nations to enhance humanitarian assistance to those displaced by the fighting, his office said.

Kenya is sending about 900 troops to the DRC as part of a joint EAC force set up to help restore security, with a first batch of soldiers arriving a week ago.

Several civilian and military sources reported a relative calm on the various frontlines Saturday, although one civil society representative in Kibumba, about 20 kilometres (12 miles) north of Goma said there had been looting there and blamed Rwandans.

In an incident on the tense border early Saturday, the Rwandan military said an "unidentified soldier believed to be from the FARDC" crossed the frontier "and started shooting at Rwanda Defence Force guard towers".

"He was shot dead by RDF patrol before causing any casualties," it added.

Congolese officials said the identity of the dead man was not known, but that no Congolese soldier on duty in the area had been reported missing.