US and allies condemn rebel advances in DR Congo 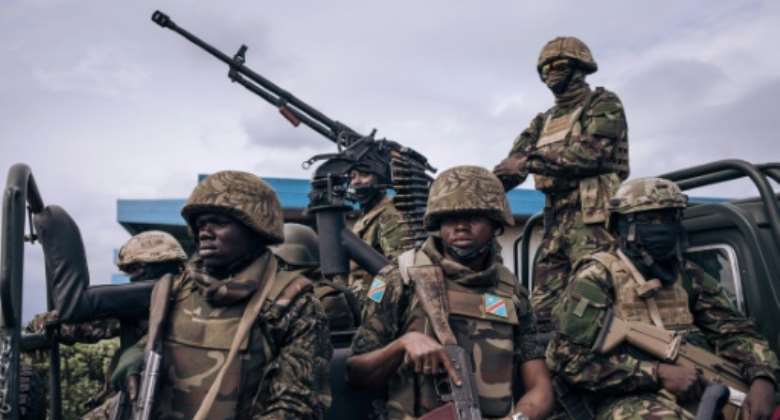 Kenyan and Congolese troops stand guard at the airport in Goma, in the eastern Democratic Republic of Congo, as former Kenyan president Uhuru Kenyatta, now a regional negotiator, landed on November 15, 2022. By ALEXIS HUGUET (AFP/File)

The United States, France, Britain and Belgium on Friday condemned "in the strongest terms" advances by the M23 rebel group in the eastern Democratic Republic of Congo, calling on them to pull back immediately and cease hostilities.

"The resumption of violence since 20 October, including in and around the towns of Rutshuru, Kiwanja, Rumangabo and Kibumba, undermines peace efforts and has caused further insecurity and significant human suffering," the US said in a joint statement with the British, French and Belgian envoys for the Great Lakes region.

They called on all parties to participate in a new round of peace talks scheduled for next week in Nairobi.

"All support to non-state armed actors must stop, including external support to M23," the statement said.

The March 23 movement, or M23, is a former Tutsi rebel group that took up arms again at the end of last year and seized the town of Bunagana on the border with Uganda in June.

After a brief period of calm, it went on the offenive again in October, greatly extending the territory under its control.

The East African Community (EAC) has announced that new peace talks are due to start in the Kenyan capital on November 21, although it has not yet specified who will be attending.

Kinshasa accuses Rwanda of providing M23 with support, something that UN experts and US officials have also pointed to in recent months.

Kigali disputes the charge, accusing Kinshasa of collusion with the FDLR, a former Rwandan Hutu rebel group established in the DRC after the genocide of the Tutsi community in 1994 in Rwanda.