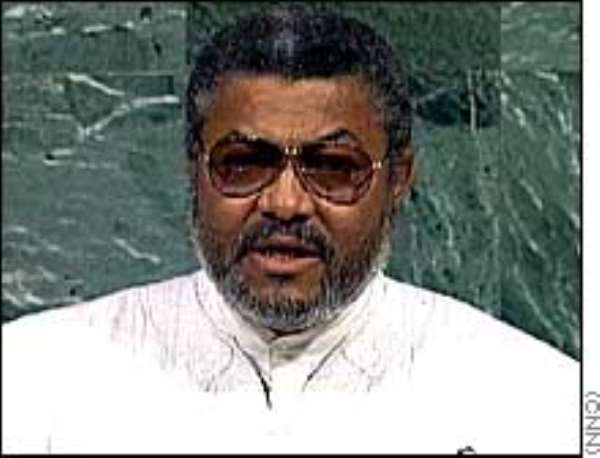 Government says it is in-charge of the nation and that the international community should not panic over the widely publicized alleged coup plot by Former President Jerry Rawlings.

At a press conference on Tuesday, government told journalists that it stands firmly by its charges of coup plot against the former AFRC and PNDC Chief, and that it has no intention of withdrawing the allegations.

But the government was not prepared to defend its claim with hard evidence, except to cite the unparalleled history of Mr Rawlings as Ghana's most notorious coup maker.

Tuesday's press conference was organised to respond to a challenge thrown to President Kufuor by his predecessor, Jerry Rawlings, to mention the name of the oil-rich nation from which he was allegedly seeking financial support to topple the New Patriotic Party (NPP) regime.

But Information and National Orientation Minister, Kwame Bartels, told journalists on Tuesday that President Kufuor will not publicize the source of the said intelligence.

In a deliberate attempt to drive home the point that a return of Mr Rawlings to the corridors of power would plunge the nation into yet another era of state-sponsored atrocities against the citizenry, Hon. Bartels beamed on National Television a series of pictures, showing the flogging of naked women in public, public executions etc. to viewers nationwide.

Mr Bartels reminded Ghanaians that former president Rawlings also supervised a systematic killing of several innocent Ghanaians during his days in power and that Ghanaians should take note.