Nursing student on a mission to build a hospital in Ghana 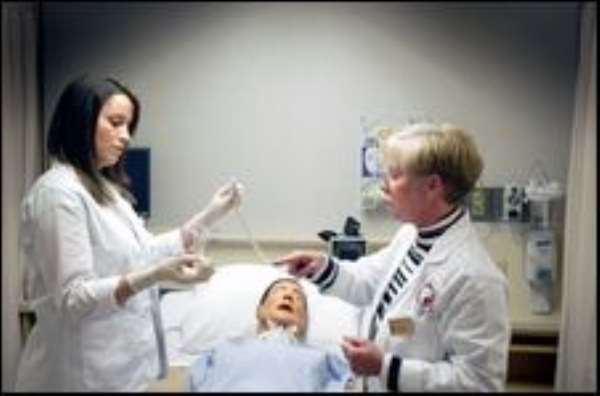 She shares her story through pictures on her laptop computer.The file from her summer trip to Ghana is so large, it takes a few minutes to open.When it does, each image reveals its own separate story of sickness and helplessness. Rebecca Conte knows each story by heart. Names, ages, family members and, most important, the list of ailments -- primarily HIV and AIDS.

She traveled to the West African country in June to help heal them.

Conte, 21, a Seattle University nursing student, said her six-week mission trip changed her life. Now she is trying to raise $46,000 to build a hospital in the village where she spent most of her time. The government, she said, will pay to run the hospital once it is built.

She wants the hospital to focus on helping HIV and AIDS patients to whom, she said, doctors refused to give medication.

"I think it's the stigma of AIDS and doctors who think people bring it on themselves," Conte said while showing pictures on her computer of patients she met in Ghana affected by the disease. "I wanted to build a hospital where people advocated for (the patients)."

She said she contracted with an engineer in Ghana to make the plans for the hospital. The engineer estimated the cost at $46,000, Conte said. She also designed short-sleeve and long-sleeve T-shirts she plans to sell for $14 and $18. After paying for the printing on the shirts, she hopes more than 70 percent of the proceeds will go to fund the hospital, she said.

She also is not hesitant to seek help in high places.

She wrote several letters to Oprah Winfrey and Ellen DeGeneres, but hasn't heard back from either yet. She plans to apply for a grant from the Bill & Melinda Gates Foundation.

"This gives you hope for the future of nursing," said Mike Rona, president of Virginia Mason Medical Center. "She's just making the world shake all by herself."

Rona, whose son was a high school friend of Conte's, was one of about 100 people on her e-mail list as she chronicled her days in Ghana. Conte also works for Virginia Mason while she finishes her degree.

He said he was touched by one e-mail in particular describing Raymond, a 17-year-old who was emaciated and dying from abdominal infections. Raymond traveled to Ghana from nearby Togo for treatment. When Conte described the boy's death and his family's inability to pay to remove his body from the morgue and have it shipped home, Rona sent $1,000 to cover the costs. Conte made the trip to Togo to deliver Raymond's body to his family.

"Those e-mails were a roller-coaster ride through the eyes of a young, hopeful, intense person who wants to make a difference for people," Rona said. "She wasn't asking for money, just sharing her frustrations, and helping her seemed like the right thing to do."

Rona said he is trying to figure out ways to help raise money for the hospital.

Conte's desire to help those in need began at an early age. Her mother is a nurse at Harborview Medical Center. Her older sister is also a nurse. Her father is a professor of social work at the University of Washington, and her other sister is a teacher. So serving others and volunteering was always a part of her upbringing, she said.

"Rebecca has always been a very secure child," said her father, Jon Conte. He said her combined knowledge of nursing and heart of social work has taken her service to a higher level.

"At her age, I would have never thought to raise money to build a clinic in Africa," he said.

Conte has been on mission trips to Mexico seven times, beginning her freshman year at Mercer High School. She went to the Dominican Republic with her church when she was 19. Her ideal nursing job is working six months in the U.S. and six months in another country, preferably in Africa.

"I'm more myself when I'm on these trips," she said. "I have a sense of peace and I'm more focused on relationships with people."

She signed up to go to Ghana through her church, paying for the trip herself, and worked with the Ghanaian-based AIDS organization New Seed International. She was the only volunteer from Seattle and worked with 24 others from the U.S. and Canada, mainly at a government hospital in Ho, a village in the southeast corner of the country. She slept in a bunk bed covered in a mosquito net in a dorm-style room she shared with other volunteers. She walked everywhere, including the nearly hourlong trek it took to get to and from the hospital where she volunteered. She said witnessing medical care in its most basic form confirmed her desire to be a nurse and focus her efforts abroad.

"The treatment that people are able to receive here isn't even accessible (in Ghana)," she said. "I understand that many people still lack treatment here, but at least there is the possibility of it."

As she continued to look through her slideshow of photos, she remembered the people she met in Ghana.

Akofa, the first patient Conte lost. Nine-year-old Ernestina, whose parents died of AIDS and whose uncle said he couldn't take care of her anymore. Five-year-old Lizzie, who also lost her parents to AIDS and is blind in one eye. Peace and her 9-year-old daughter Prudence. All were HIV positive. Some have died of AIDS since Conte left Ghana.

A hospital to offer treatment, she said, will tell the living that there is hope and that the disease doesn't mean immediate death.

Seattle University nursing student Rebecca Conte wrote e-mails every few days to friends and family in Seattle during her six weeks in Ghana this summer. Here are excerpts:

"The hospital is very understaffed. There are 240 beds, but only 120 are used. To fully staff all the units, they would need a total of 220 nurses employed, although they only have 120. For this reason, many patients are turned away. The pay system is also very different. When a doctor orders a medication for a patient, the patient must first pay the nurse, then the nurse brings the money and the prescription to the inpatient pharmacy. When the medication is brought back to the unit, then the patient can take it. If the patient cannot afford the medication, then the patient does not receive treatment."

"As I sit on the windowsill, I watch this 17-year-old boy, 6'2" and barely 50 lbs., gaze into Katie's eyes. He watches her every move, so thankful for her company. Every bone in his body protrudes from his skin. As we give him a bed bath with moist towelettes we brought, we run our fingers over his delicate skin. ... The odor from his wound is overwhelming. ... His second surgery has now officially failed, and the doctors say there is nothing else they can do. He asks us everyday to bring him to America, because an American doctor would fix him ... Raymond keeps fighting, hoping he can regain his strength and prove the doctors wrong. Others have begun to help us search for someone that will give him a third chance. We pray that someone will look at him and see the child inside fighting to get up out of that hospital bed."

"When I was in Akatsi I got a call from my Ho friends letting me know that Raymond has passed away. We are all in utter shock. Please keep his mother in your prayers as now she has a 6 billion cedis bill to pay and she can't pay it so they won't give her Raymond's body. He will be sitting in the morgue until she pays it and will not be able to take him back to Togo until then."

"I adopted an idea from the SU College of Nursing's Belize program where they started a foot clinic for adults in the community. I took that idea and changed it a little bit to start a hygiene clinic with the kids last evening. It was a blast -- volunteers were washing hands and feet, others were taking pictures and coloring with the kids when they were done. One volunteer took all the shoes and washed and cleaned those, and others dried the kids when they were done."

"This weekend was very successful. We were able to work all the details out for Raymond's body and leave on Saturday. We first went to the morgue, paid the bill, and then rented a truck to put his body in the back of ... . I just watched out the window for the hour-and-a-half drive to Aflao, the town where Raymond was to be buried, crying my eyes out and trying not to let the mother see me so upset. It was miserable."

"I am taking so much away from this experience, more than I even know at this point. I am so excited to come home and see how this experience will continue to be processed in my mind, and how much more I still have to learn from my experiences here over the past six weeks."

Group demand justice for Fulani who died under mysterious ci...
33 minutes ago