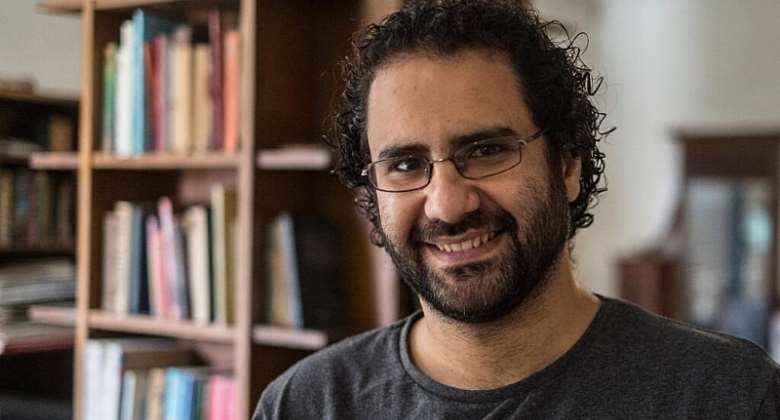 Egyptian-British pro-democracy blogger Alaa Abdel Fattah ended his seven-month-long hunger strike from jail earlier this week, and was finally allowed a family visit, which his sister called “unsettling” after his relatives saw him in such a poor state of health.

“When we saw him today, he was exhausted, weak, and vulnerable. He was very, very thin,” said the statement released by the family after their visit.

"Alaa deteriorated severely in the past two weeks, but at least they got to see him, and he needed to see the family so much", wrote Mona Seif on social media.

He had only been consuming 100 calories per day, but decided to stop eating food, and then water, on 6 November in an effort to call attention to his plight, which coincided with the Egypt-hosted UN COP27 climate summit.

His case has gained a lot of attention during COP27, highlighting Egypt's dismal human rights record.

He also stopped all food and water in an effort to get a visit from British consular officials. Egypt has refused to recognize that Fattah, 40, is a British citizen.

His mother, Laila Soueif, was allowed to see him after nearly a month, despite repeated attempts to access the Wadi al Natrun prison.

Intimidation
The prison officials were pressuring him to be medically examined at the health centre, which he refused, and riot police were brought in to take him out.

“As he was being carried out “he lost it”, had a meltdown and promised to kill himself if he was taken back to the cell,” according to the family statement.

He was taken back to his cell, where he was restrained. He repeatedly banged his head against the wall until he drew blood, added the statement.

His mother, sister, and aunt on their visit to the jail that he collapsed in his cell and woke up with an intravenous drip in his arm.

Fattah is serving a five-year sentence for “spreading false news” by sharing another person's Facebook status on police brutality. Human rights groups have condemned the charge and the sentence.

An estimated 60,000 political prisoners are currently being held in Egyptian jails, many in poor conditions, according to human rights groups.

The UK Foreign, Commonwealth and Development Office stated that Prime Minister Rishi Sunak brought up his case with Egyptian President Abdul Fattah al-Sisi while in was at COP27 last week.

However, he refused to answer any questions on the fate of Fattah when asked by reporters at COP27.