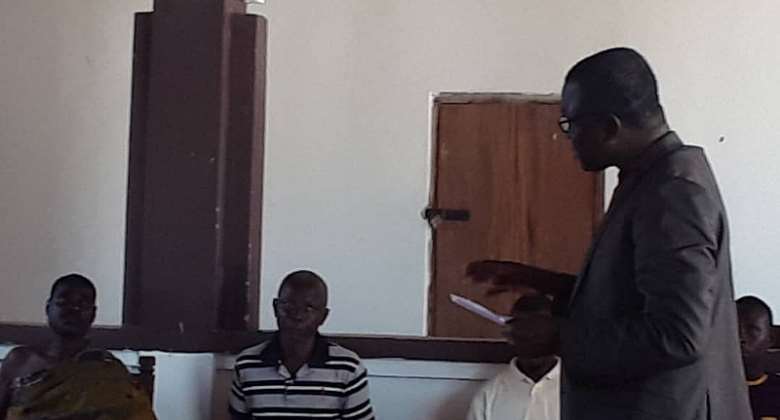 As part of measures to improve well being and promote a healthy lifestyle of residents in the Wassa East District, management of the Assembly led by the Chief Executive has partnered Church of Christ (Ateiku) and some group of investors from the United States of America to pilot the construction of modern toilet facility and extension of water supply to households.

The project which is expected to take off in January 2023 would be piloted in Daboase, the district capital, Ateiku and Atobiase.

The District Chief Executive (DCE) Hon. Emmanuel Boakye disclosed this when he paid working visits to Appeasuman, Old and New Subri and Wassa Akyempim in the Western Region. It was to engage the people to assure them of the Assembly's commitment to bridging the development gaps as well as offer them the opportunity to share their development concerns.

The DCE said the household toilet and water supply project will be done at a subsidised rate with flexible terms of payment. He noted that beneficiaries would pay 30 per cent of the total cost of the project and pay the rest whiles using the facility in instalments.

According to Hon. Boakye, the project is a priority of the Assembly since it’s no longer a government policy to provide public place of convenience, stressing that most of the request that comes before him are usually requests for public toilets hence the partnership deal with the investors.

He also assured the people that there are more partnership deals at the discussion stage intended to give scholarships to young adults to pursue professional studies outside the country in medicine, nursing, law among other equally important programmes.

He added that a similar opportunity will be given to artisans to travel to countries where their skills and services are in high demand, describing it as the development of the human capital required to improve the well-being of the people. "Once there is growth in the living condition of the people the local economy will be the gainer," he emphasized.

For his part, an Assistant Director, Mr. Patrick Achampong urged the people not to renege on their responsibilities as citizens by paying their taxes. Explaining that most of their demands can only be met when they play their role as patriotic citizens. “The Assembly is struggling to meet its development targets due to non-compliance with tax obligations, thereby delaying project execution timelines," he indicated.

Some of the project requests tabled before the DCE include among others, reshaping of roads, water supply, streets light, deplorable state of school infrastructure, quarters for nurses and teachers as well as employment opportunities.