By Louise DEWAST with Aminu ABUBAKAR in Kano
Nigeria 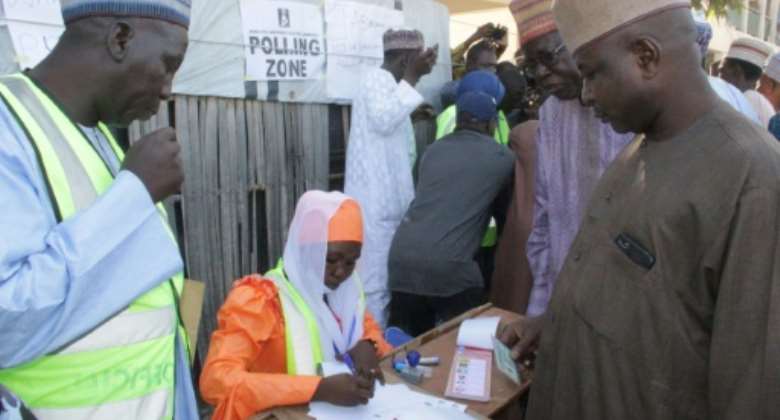 Abacha Muyam and Babakura Alhaji Isa, friends from Bama in the northern Nigerian state of Borno, both voted for President Muhammadu Buhari in their country's elections in 2019.

Now the 41-year-old and 27-year-old are at odds over who should succeed their champion in next February's ballot.

Their disagreement symbolises much of the fragmented opinion in Nigeria's northern states -- a crucial electoral battleground.

Megacity Lagos in the predominantly Christian south of the country has the most registered voters, but it is the mainly Muslim northern states that historically record higher levels of turnout.

Their support delivered the presidency to Buhari in the last two elections, but now voters and analysts say the region appears more splintered.

Sitting next to each other on a mat under a tree in Borno's capital Maiduguri, Muyam said he would vote for Bola Tinubu of the ruling All Progressives Congress (APC) party, and Isa for Atiku Abubakar of the opposition Peoples Democratic Party (PDP).

Voters queue during local elections in Maiduguri on November 28, 2020.. By Audu MARTE (AFP)

Sixteen other candidates are running for the top job, including Peter Obi of the Labour Party (LP) and Rabiu Kwankwaso of the New Nigeria Peoples Party (NNPP).

"The north tends to vote along the same line," Hakeem Baba-Ahmed, spokesman of an influential socio-political organisation, the Northern Elders Forum, told AFP.

But "it's not substantially committed" yet, he said. "We still have a long way to go."

That means, he said, the region was open to candidates "who want to convince as many of us as possible that they are serious about our problems."

But the choice of candidates today is more complex than ever before, and predicting the outcome of next February is a bold gamble.

Tinubu, for instance, is Muslim like most northerners, but he is from the south, while Abubakar is from the north but his party is more popular in the south.

Kwankwaso could win Kano state which has had the largest pool of voters in the past, while Obi is popular in the south and generally with young people. Both are expected to get votes that would otherwise go to Abubakar's PDP.

"Some people are saying (his party) NNPP doesn't have the needed national spread to win... Whatever these people say, Kwankwaso is my choice and I'll give him my vote," said Kano-based truck driver Hassan Muhammad.

"For the eight years he was governor, Kwankwaso brought so much development," he added.

While politicians "can't win without the north" Baba-Ahmed cautioned, "it's also not enough."

Candidates need to win both 50 percent of total votes and 25 percent of ballots in two-thirds of the country's 36 states.

"Nigerian presidential elections are a numbers game," analysts Okechukwu Ibeanu and Idayat Hassan from the Center For Democracy and Development (CDD) wrote in an August report.

"Presidential tickets are developed with these national and regional calculations in mind," the analysts said.

"Alliances, even between some of the four leading parties, remain possible as the campaign period unfolds."

In the northeast, some voters will support Tinubu because they back the APC and because of his running mate, Kashim Shettima, a former governor of Borno state.

Gambo Saleh, a 48-year-old who sells tyres on a busy street of Maiduguri, is among those backing Tinubu.

"His running mate is from Maiduguri so we will get a better government from them," said Saleh.

Nigeria's All Progressive Congress (APC) ruling party Kashim Shettima salutes during a meeting to unveil him as its Vice-Presidential flagbearer in Abuja on July 20, 2022.. By Kola Sulaimon (AFP)

"He (Tinubu) built Lagos to be a better city, and I think he will do it also in Nigeria, even if he is a southerner."

At the University of Maiduguri, opinions are more mixed.

"Tinubu is old! We don't think he will do much," said Zahra Abba, a 22-year-old biology student. "I would like to vote Atiku (Abubakar)."

At 75, Abubakar is five years older than his rival but many Nigerians worry about the rumours of Tinubu's poor health.

Out of six students interviewed by AFP, three said they wouldn't vote at all next year.

"The obstacle we are facing is that the leaders we have, they won't give us our choice, even if we vote for our choice, there will be malpractice," said computer science student Abdulrahman Ibrahim.

Nigerian security forces seen on the site of a sabotage attack allegedly perpetrated by Boko Haram on the outskirts of Maiduguri on February 12, 2021.. By Audu MARTE (AFP)

Past elections in Africa's most populous country have been marred by violence and fraud.

In particular in the northwest, heavily armed criminal gangs could prevent people from voting and complicate the deployment of election officials and materials.

The Abuja-based think tank CDD has warned that "a widely disrupted election in the northwest raises challenges about acceptability of electoral outcomes."