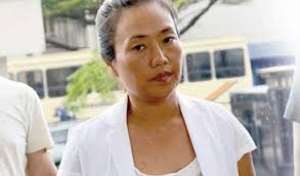 More details are emerging about how Chinese galamsey kingpin Aisha Huang began in the country.

The state prosecution's third witness, a director of a mining prospecting company disclosed at an Accra High court that the 47-year-old started her operations by encroaching on his concession in 2015.

Submitting documents including maps and receipts from the Minerals Commission Nana Sarfo Prempeh told the court that he obtained a permit to undertake prospecting of minerals in areas in the Ashanti Region.

According to Nana Sarfo Prempeh sometime in 2015, Aisha Huang entered his concession and started undertaking mining activities, this he said took a toll on his company and impeded them from carrying out explorations.

The witness further explained that in an attempt to halt the activities of Aisha he wrote letters to the Regional Security Council, filed a complaint with traditional council and the Police headquarters in Accra but all proved futile as the accused continued with her mining operations.

He ultimately filed an injunction at the Bekwai District Court which was granted and the accused was barred from continuing her operations.

“I know the accused person. My knowledge of her bothers her illegal activities at the Volta resources concession. In 2015, she commenced her mining operations at the concession of Volta resources.

“From that period of 2015-2017, we made all efforts to evict her from the land and stopped her illegal activities which all proved futile.

“I hereby state that her activities were illegal because my company Volta resources limited had been granted a prospecting license so there is no way she could possibly have a mining license over the same piece of land.

“I reported the case of her encroachment and illegal mining to REGSEC and also to the chiefs and traditional leaders of Bekwai. That also proved futile. I wish to tender into evidence a letter dated 3rd June, 2015 from Volta Resources Ltd to REGSEC as proof of our complaints about the encroachment activities of the accused person.

“In February 2016 VRL made a formal complaint at the Police HQ. A team of investigators were assigned but nothing came out of it.

“On April 11, 2017 VRL filed a writ of summons against En Huang at the Bekwai Circuit Court. Edward Koranteng was the plaintiff in behalf of VRL against Aisha Huang of Kumasi.

“Volta Resources Ltd also caused to be published in the media the encroachment and devastating effect of the illegal mining activities of the accused person in its concession and the effect on the host the communities.

“Letter dated 8th June 2017 with the subj being petition to IGP regarding the land seizure of excavators, machinery and equipment relevant to the case of the republic vs En Huang but nothing came out of it.