Man catches his pregnant wife in bed with another man 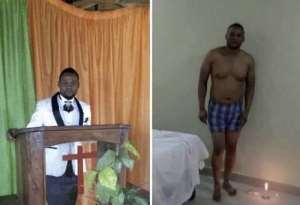 Wonders they say shall never end as the unexpected happened to a certain man who is happily married to a woman, with whom he is expecting a baby.

In a viral video that is circulating on social media, the said man returned home and met his pregnant wife in bed with another man.

In the video, the said man has arranged several lighted candles beside the bed, which many believe was a charm used on the pregnant married woman.

The heartbroken man is heard saying: “don’t move! Don’t move,” and asking his wife: "on my bed Martha?”

Modernghana News is yet to find out where exactly the incident happened, but per the report, the man who had his way with the pregnant woman is allegedly a man of God.