Maikyua, Why Are You Requesting Mrs. Tallen’s Apology Over Human Rights Concerns? As Ozekhome And Falana Voiced The Same Concerns
By John Egbeazien Oshodi
Feature Article

According to Mr. Yakubu Maikyua, the recent president of the Nigerian Bar Association (NBA) the Minister of Women Affairs and Social Development, Mrs. Pauline Tallen should apologize for raising chronic human rights rot and lingering problems such as gender injustice in the Nigerian Judiciary.

A judiciary that contains habits of acting like Kangaroo court in terms of judgments which disregards basic principles of law or human rights, especially relating to non-powers that be and gender fairness.

In what appeared as a social, psychological, and public domineering and sexist ways as evidenced in his authoritarian letter to Mrs. Tellen, Maikyua, demanded that the Woman Affairs minister withdraw her comments on a judgement of the Federal High Court and tender an apology within seven days. This is chauvinism at its worse.

The Minister, one of the very few females in the Buhari’s administration in a TV interview referred to a court judgment as “a kangaroo judgement” in order words the NBA president see her words as disrespectful and contemptuous of the court system. Really?

Demanded she apologize to a judicial system dominated by chronic corrupt practices as continuously noted by open minded members of the judiciary, the Nigerian people and even the international world. Apologize ke. For telling the truth?

Mr. Maikyua, tell the world you did not really ask for apology from her as on behalf of many Nigerians she is pointing out some of the well-known abuses of the court process?

In his letter to the Minister, Maikyua, said “Your comments were clearly calculated to impugn the integrity of the Court, bring it to disrepute and incite the public against the Judiciary…”

Maikyua, are we speaking about the same court system where the entrenchment of feeble integrity, insufficiency of honesty, minimal dignity and inadequate transparency plague the system?

Mrs. Tallen’s convincing comment was about the rot in the judiciary, especially the judgement of a Federal High Court which nullified the All-Progressives Congress (APC) 2023 governorship elections primary in Adamawa State of Aishatu Binani, the only female governorship candidate in Adamawa.

According to media reports to the public, Binani was elected as the APC governorship candidate in the now-nullified primary election held in the state on May 26. She scored 430 votes to defeat her closest rival and former chairman of the Economic and Financial Crimes Commission, Mr. Nuhu Ribadu, who scored 288 votes.

Nigerians and the world, saw the questionable judgement from Justice Abdulaziz Anka a male judicial officer, who nullified the primary which had qualified Senator Aishatu Dahiru Binani as the APC governorship candidate in Adamawa state.

Many saw this as unacceptable and a great injustice to the average Nigerian especially to women known to be constantly being marginalized and maltreated in the nation, a long-term massive concern that the Chairperson of the Nigeria Diaspora Commission, Abike Dabiri-Erewa, a former Nigeria Federal House of Representatives has been concerned with since 2011 or so, in regards to inclusive representation of women in workplaces as politics and law.

What would suddenly make a judge to void the APC governorship primary conducted in May 2022 and supervised by Independent National Electoral Commission (INEC), if not for acting as a kangaroo type courts.?, how does a judge come to that seemingly appalling conclusion that a governorship primary conducted in May 2022, just like others around the nation as prescribed in election law, if it was not acting as a kangaroo type court.?

What will make a judge decline to order for a fresh or another primary, even though it was not necessary here, if not for acting as a kangaroo type court.?

The matter is now at the appellate level, while I do not want to paint every judge with the same brush of unfairness, the three-man pre-election zonal panel of the Appeal Court sitting in the State of Yola, hopefully will admonish the apparent toothless INEC, enter a fair judgment, set aside the judgement of the lower court and uphold the female candidate, Binani as the true lawful winner of the primary election conducted on the 26th May 2022, except it may be also acting in the ways of a kangaroo court?

The minister’s cry out and tears regarding the image and psychology of some of the behaviors and actions within the judicial system which she poured out during the reunion and annual general meeting of her alma mater, Federal Government Girls’ College, Bida, Niger State is noteworthy.

The Minister’s cry out about the types of “a kangaroo court judgement” will not be the first.

The Minister, Tallen, is only noting what some able and open-minded Nigerians have seen about the Nigeria court system.

In what other way in psycho-legal terms will judgments like the one from Justice Anka, of the Federal High Court in Yola, Adamawa State, on Binani not be likened to that of a kangaroo court type judgment, meaning a judicial approach that is categorically known as unfair, biased, and marked with a proceeding style considered phony, shady, and without regard for justice.

Others might not have used terms like “kangaroo” type courts. as Mrs. Tallen, but certainly the likes of the globally known Professor Mike Ozekhome ,SAN, has noted in the following in the media “not few Nigerians believe that justice can only be bought and sold to the highest bidders in terms of people with deep pockets. Not few Nigerians believe that, particularly in election petition matters, that the judiciary is up for grabs, in terms of where the pendulum swings during electoral contestation. Many people believe for some occasions that some judges even fight frantically to be included into election petition tribunal/panels because of what many people believe will be the money that will accrue from it.” “So, such a perception is dangerous for effective dispensation of justice…It is therefore left for the judiciary to do everything possible to wipe out from the mind of the public this ugly, odious perception that justice is being sold to the highest bidders.”

For the new NBA president, Maikyua, how is the above rightful notations from Ozekhome not in line with the mentality and ways of a kangaroo court, should he apologize also? Tell Nigerians and the world.

Mr. Maikyua, Ozekhome has reminded Nigerians of the Kangaroo ways when he noted that the “quality of judgments that started coming from the judiciary…with all due respect was nothing to write about, because one could see the handwriting of fear-induced judgment, fear of the unknown, fear of the executive, fear of the legislature, fear of fear….”

That is what the Minister, Mrs. Tallen was raising regarding the way law and justice are disregarded or perverted. Did you know that?

A kangaroo court style is where judges lack the courage to give fair verdicts.

Another Human rights activist and lawyer, Mr. Femi Falana, (SAN) might not have used the term kangaroo directly, but some of his words to the media point to such unscrupulous principles, “The winners of primaries and general elections are no longer determined by the electorate but by the election petition tribunals and courts. The increasing involvement of the judiciary in the internal affairs of political parties and elections has exposed the judiciary to ridicule. “

Falana noted here what resemble the ways of kangaroo court “The courts have abandoned their primary role of ensuring compliance with the Electoral Act and the relevant legislations of the constitution pertaining to general election. Apart from usurping the powers of INEC in organizing and supervising elections, the courts have taken over the mandate of the electorate...”

Falana, also once said, ““The judicial process is the only method by which erring members of the society can be made accountable and be made to pay the penalty for wrongdoing.” 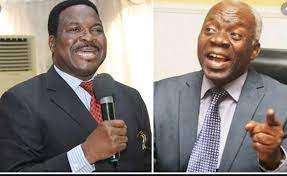 I could believe Tallen understood the court judgment of Justice Abdulaziz Anka, which stood out as a resemblance to judgments from kangaroo types of courts, based on the above kangaroo types of ways within the Nigerian court system, as asserted by the likes of Ozekhome and Falana.

Nigeria is supposed to be a nation of laws. But what happens when the justice system breaks down? When the courts are no longer impartial, the judiciary is dictatorially acting out, issuing judgments that result in unequitable and unfair judicial processes in relations to being complicit in undermining democracy?

This is the reality of kangaroo like courts in Nigeria. Such is bitter truth that Mr. Maikyua, the NBA president is asking the Minister of Women Affairs, Mrs. Tallen to tender apology for as it relates to gender injustice in politics and law. Amazing?

Mrs. Tallen’s call was to address plight of girls and women across Nigerian courts, the continued violation of equality before the law and the need to act against impunity and as a woman she speaks against a society of the rule of man and refuse to take a back seat, Mr. Maikyua, should apologize to all women and Nigerians and promise that in his time over the colonial propelled crisis filled association (NBA) the rule of law will hold for all fairly in Nigeria.