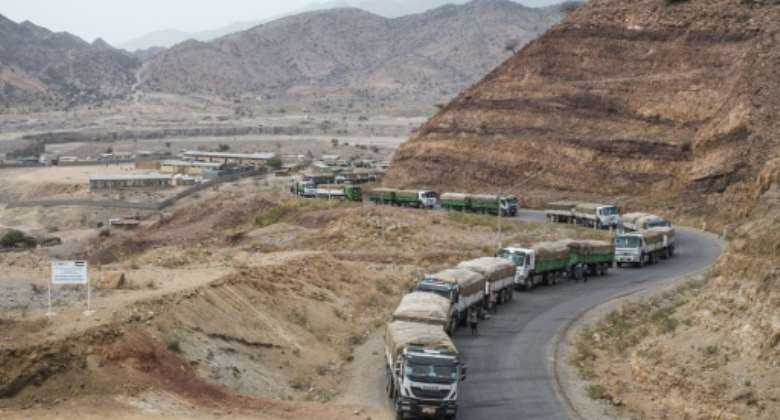 Aid deliveries to war-torn Tigray were forced to a halt in August when fighting resumed in northern Ethiopia. By EDUARDO SOTERAS (AFP/File)

The World Food Programme said its first aid convoy since the signing of a landmark peace deal between Ethiopia's government and Tigrayan rebels had arrived in the war-torn Tigray region on Wednesday.

The restoration of aid deliveries to Tigray was a key part of the agreement signed in South Africa to silence the guns in the two-year conflict that has killed untold numbers of people and unleashed a humanitarian crisis in northern Ethiopia.

"@WFP convoy just entered North West #Tigray via #Gondar corridor for the first time," the UN agency said on Twitter, with a spokeswoman telling AFP it was the first to arrive in the region since the November 2 ceasefire agreement.

The WFP announcement followed the arrival on Tuesday of a medical aid convoy from the International Committee of the Red Cross, the first ICRC trucks to arrive in Tigray since the deal between the Ethiopian government and the Tigray People's Liberation Front (TPLF).

The WFP spokeswoman said 15 trucks had entered the region on Wednesday, with "more (expected) in the coming days".

The agency said the convoy had travelled along a route through neighbouring Amhara for the first time since June 2021, when TPLF fighters recaptured Tigray from federal forces and expanded into the bordering regions of Amhara and Afar.

The November 2 deal was followed by an implementation accord reached in the Kenyan capital Nairobi on Saturday, with the two sides committing to facilitate unfettered humanitarian access to "all in need" in Tigray and neighbouring regions with immediate effect.

Tigray, a region of six million people, has been suffering from a severe lack of food and medicine, as well as limited access to basic services including electricity, banking and communications, with the UN warning that many people were on the brink of starvation.

Aid deliveries were forced to a halt in August when fighting resumed in northern Ethiopia, shattering a five-month truce and leading to the capture of key towns in Tigray by pro-government forces.

Ethiopian Prime Minister Abiy Ahmed has vowed to fulfil the commitments made in the peace deal, saying that his government secured 100 percent of what it had sought in the negotiations with the TPLF.

As well as the restoration of aid and a cessation of hostilities, the deal reached in the South African capital Pretoria calls for the disarming of TPLF fighters and the re-establishment of federal authority over Tigray.

But it makes no mention of the presence on Ethiopian soil or any possible withdrawal of Eritrean troops, who have backed Abiy's forces and been accused of atrocities.

A senior State Department official on Tuesday told reporters that the United States would not hesitate to use sanctions "if that should become necessary in terms of holding actors accountable for human rights violations or for the purposes of trying to ensure that this agreement is respected".

The conflict between the TPLF and pro-Abiy forces -- which include regional militias in addition to the Eritrean army -- has forced more than two million people from their homes and driven hundreds of thousands to the brink of famine.

The war erupted in November 2020 when Abiy, a Nobel Peace laureate, sent troops into Tigray, accusing the TPLF of attacking federal army camps.

The TPLF had dominated national politics for nearly three decades until Abiy took office in 2018.