The Tsatsu Tsikata Trial-A viewpoint as judgment is adjourned to December 07. 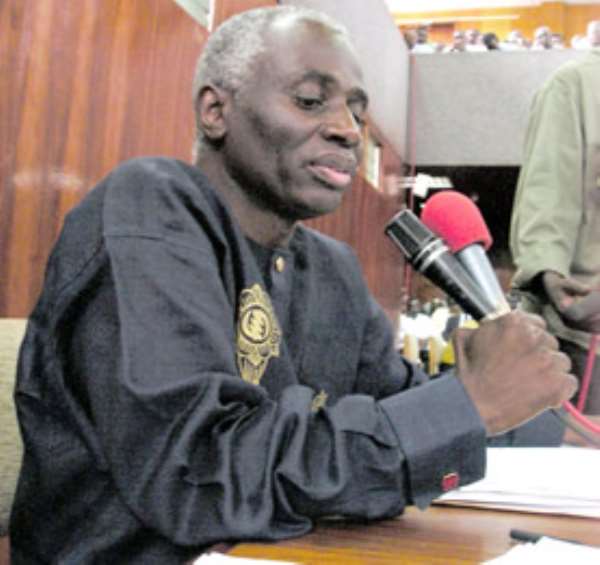 Anything which has a beginning obviously has an end, and all things being equal the historic and well publicized criminal trial of the ex-Chief Executive Officer of the Ghana National Petroleum Corporation (GNPC), Mr. Tsatsu Tsikata, is expected (barring any further adjournment) on December 7, 2006.

The case which has dragged for about five years should have ended last Friday but the trial judge, Justice Henrietta Abban was compelled as it were to adjourn following an application by Tsikata's counsel Professor E.V.O Dankwa that his client has an appeal pending at the Court of Appeal.

Tsikata is asking the Appeal Court to order the International Finance Corporation to appear before the Fast Track to testify in the case for which judgment has been adjourned to December 7.

When judgment is given on December 7, Justice Abban would have finally gotten herself rid of what she referred to sometime ago as an “albatross around my neck”.

She can then concentrate more on her job at the Court of Appeal, with the expectation of promotion to the Supreme Court bench, a dreamland for any judge.

Prosecution's Case,
The facts of “this historic political trial” as some prefer to call it, according to the prosecution are that GNPC, then headed by Tsatsu Tsikata, in March 1991, guaranteed a loan agreement for Valley Farms Limited, a mainly cocoa –farming company started by Mr. Jim Wilson, an American citizen who has been in Ghana, for more than four decades. To enable Valley Farms expand some cocoa farms it had acquired from Ghana Cocoa Board, when they were put on divestiture by Cocobod, the Managing Director of Valley Farms, Mr. Jim Wilson went to Merchant Bank in 1987 to seek help in raising financing for the company. It was Merchant Bank which brought in GNPC as an equity partner, according to Mr. Wilson and recommended the corporation to the management of Valley Farms, which accepted the recommendation. Indeed, the evidence was that it was Investment Holdings Ltd, a subsidiary of Merchant Bank which operates as a trust corporation, which was one of the original shareholders in Valley Farms and remained the shareholder even after GNPC expressed interest in acquiring the shares and authorized Investment Holdings to act on its behalf.

Mr. Wilson revealed to the Fast Track High Court how Valley Farms went as far as Abidjan, Cote d'Ivoire in search of financing at the Africa Project Development Facility (APDF), an international development agency in that country under the International Finance Corporation (IFC), a subsidiary of the World Bank.

It was through APDF that the French development agency, Caisse Centrale at the time, (now Agence Francaise de Developement) got interested in Valley Farms Limited, according to Mr. Wilson, and after various feasibility studies, decided to take equity in the project and to provide the loan.

Mr. Wilson also testified about how, after Valley Farms got the loan, disbursements were made for various aspects of the project with receipts being provided to Caisse Centrale before more funds were provided.

Mr. Wilson, a prosecution witness in the case, significantly told the Fast Track High Court, that the company is in “a very healthy condition at the moment” and poised to make profit for all shareholders to enjoy. Under cross-examination by one of the lawyers for the accused, Major (Rtd) R. S. Agbenoto, Mr. Jim Wilson described the future of the project as: "Very bright"

He stated that both he (Mr. Wilson), and Mr. Tsatsu Tsikata, saw the Valley Farms project, which involved developing a special variety of high quality cocoa as being very beneficial for the country. He also testified that GNPC paying up the Caisse Centrale loan when they were asked as guarantors to pay put GNPC in the shoes of the lender and Valley Farms acknowledged its liability to the Corporation.

Mr. Jude Arthur, a key prosecution witness with close links to President Kufuor and to Mr. Francis Poku, Minister of National Security, told the court he worked with Merchant Bank from 1978 to 1994 as Senior Manager of the Corporate Finance Department for the bank, and his duty was to develop new businesses for the Merchant Bank, and GNPC had been targeted by the bank "because of the flow of cash coming out of the sale of petroleum for the Bank."

There was evidence that it was through the active assistance of Mr. Jude Arthur, now the Managing Director of First Atlantic Merchant Bank, GNPC guaranteed the loan package for Valley Farms Limited, from Caisse Francaise, a French company. The equity participation of Investment Holdings limited in Valley Farms Limited increased because GNPC provided the guarantee to Valley Farms.

As per that guarantee agreement provided by GNPC, the corporation automatically became a creditor to Valley Farms; GNPC had settled Valley Farms' liability to Caisse Francaise, the original creditors to Valley Farms.

Interestingly, Mr. Jim Wilson revealed to the court that prior to charging and putting Mr. Tsikata on trial, for “willfully causing financial loss to the state and “intentionally misapplying public property,” the Police investigators on the case had several times been unable to honour their planned visit to the Farms.

Tsatsu Tsikata's Profile
Tsatsu Tsikata, first came into the national spotlight when he got a first class law degree at age 18 at the Law Faculty in the University of Ghana, Legon. Later, after another first class in Oxford University, the young and brilliant lawyer, driven perhaps by his avowed commitment to human rights, he defended many prominent personalities such as “Paa Willie”, Mr. William Ofori-Atta, and Mr. Sammy Okudzeto when they were detained during the Acheampong regime. He was involved in a case brought for the release of over 500 Ghanaians detained in various prisons in the country for long periods without trial. Tsatsu also represented his cousin, Captain Kojo Tsikata, when he was on trial for subversion before a military tribunal during the Acheampong days. He is also known to have championed the cause of students in those days and represented NUGS at an inquiry into a railway shooting incident in which a student, Adjei-Barimah, was tragically killed. It was again Tsatsu who, in 1979 was counsel for the 32-year old, Flt. Lt. Jerry John Rawlings, when he was on trial for subversion at Burma Camp in Accra, by the Supreme Military Council (SMC) regime led by Gen. F. W. Akuffo, for attempting to overthrow that government on May 15th that year.

With Tsatsu's close association with Flt-Lt. Rawlings, he got involved in the Provisional National Defense Committee (PNDC) and National Democratic Council (NDC) governments. He became Chairman of the Ghana National Petroleum Corporation (GNPC) in February 1988 after Alhaji Iddrisu Mahama, the first Board Chairman, ended his term. Later that year Tsatsu also became the corporation's Acting Chief Executive Officer (CEO). In 1995, he was made the substantive Chief Executive, with a new board chairman, Dr. J.L.S. Abbey, being appointed.

Nana Akufo-Addo, then Minister of Justice and Attorney-General, who had arraigned Tsatsu Tsikata, immediately announced at a hurriedly organized press conference that he was putting the accused person before the “normal High Court” the next day while the government pursues a review of the Supreme Court decision. The normal High Court before which Tsatsu was brought upheld a preliminary objection by his counsel that as the charge referred to acts by Tsatsu “in or about February 1993” when the law under which he was charged only came into force in July 1993, the charge could not hold. The court discharged Tsatsu but President Kufuor remained determined to prosecute him.

The very weekend President Kufuor returned to Ghana from Australia, two Police officers were instructed to go to the Asbury Dunwell Church at the Headquarters of the Methodist Church in Accra to arrest Tsatsu Tsikata, who was in church that Sunday morning worshiping. They were however prevented by a pastor of the church, Reverend Amoateng and other members of the church who pointed out that Tsatsu would come himself to the police as he had always done previously when requested to do so. Later that day, a police public relations spokesman put out a statement that the police did not want Tsatsu.

Barely had President Kufuor touched down from Australia when the then Minister for Information and Presidential Affairs, Mr. Jake Obetsebi-Lamptey, issued a press statement in which he specifically said the President, was nominating the late Mr. Justice Dixon Kwame Afreh, a Court of Appeal judge who was presiding over the Quality Grain trial to the Supreme Court, for the review of the illegality of the Fast Track High Court.

In addition to the late Justice Afreh, who before his appointment had been assigned to hear the Quality Grain case at the Fast Track High Court, Mr. Justice George Lamptey, a Supreme Court judge who had been receiving medical treatment abroad was also brought onto the review panel by Chief Justice Wiredu.

As expected, the two new judges on the panel, Justice Afreh and Justice Lamptey, joined the minority to reverse the Supreme Court's earlier decision and the Fast Track Court became legal, but now referred to as the Fast Track High Court.

Reports of the African Peer Review Mechanism, (APRM) has described the appointment of Justice Afreh as a clear manipulation by the government of the 1992 Constitution, which does not provide a ceiling on the number of Supreme Court judges that can be appointed by the President, to achieve an avowed objective.

Interesting Background Bits
The illegality around the Fast Track High Court had been reviewed, and the government's long-awaited trial commenced in earnest. Some interesting background things which have not caught the attention of most people are:
Papa Owusu-Ankomah, Nii Ayikoi Otoo, Ministers of Justice and Attorney-Generals, who were later involved in the case after Nana Akufo-Addo, as well as Ambrose Dery and Gloria Akuffo, Deputies in the Ministry, and the current Attorney-General, Joe Ghartey, were all once Tsatsu Tsikata's students at the Faculty of Law, University of Ghana. Ms. Gertrude Aikins, Chief State Attorney of the Department of Public Prosecutions, who has also recently been involved in the case, was also a student of Tsatsu Tsikata.

Tsatsu and Nana Akufo-Addo represented the plaintiff in the well-known case of Amoako-Tufuor v. the Attorney-General before the Supreme Court in 1980 which prevented Justice Apaloo from losing the position of Chief Justice when the Limann Administration came to power.

Professor E.V.O Dankwa, lead counsel for Tsatsu Tsikata, was his classmate in Legon and joined him in Oxford where they both did postgraduate studies. Professor Dankwa went on to do his doctorate degree at Yale University in the US.

They both for many years taught at the University of Ghana, Faculty of Law. Major (Rtd) Agbenoto, junior counsel for Tsatsu, was also taught by Professor Dankwa and Tsatsu.

The trial, which has been to and fro the Court of Appeal and the Supreme Court, at various stages, had already been before three courts -a Circuit tribunal, another Fast Track Court and a normal High Court before which the prosecution even filed some new charges by the time the accused was discharged.