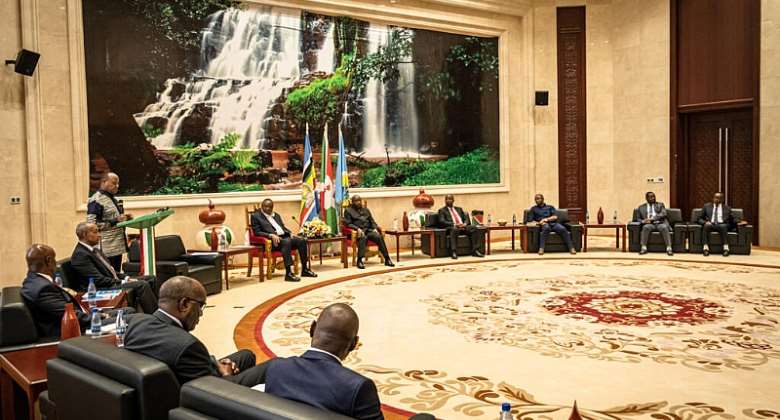 During his two-day visit to Kinshasa, the capital of the Democratic Republic of Congo, former Kenyan president Uhuru Kenyatta urged the Congolese to lay down arms and nurture a sense of patriotism. The visit came as troops in eastern DRC clashed anew with M23 rebels north of the key eastern city of Goma.

After Kenyatta landed in Kinshasa on Sunday 13 November, he held talks with DRC's President Felix Tshisekedi at the Presidential Palace of Mount Ngaliema.

Kenyatta is acting as the East African Community's facilitator on the Peace Process in the eastern region of the Democratic Republic of Congo.

The visit takes place against the backdrop of heavy fighting in Kibumba opposing the March 23 Mouvement (M23) rebels and the Armed Forces of the Democratic Republic of the Congo (FARDC).

Kenyatta held a series of meetings to assess the situation on the ground ahead the peace dialogue on the security situation due on Monday 21 November in Kenya's capital, Nairobi.

This third round of peace talks between DRC government and armed groups is held under the auspices of the East African Community (EAC), which DRC joined in April 2022.

In an interview to the United Nations' Radio Okapi, Kenyatta said that the EAC is holding talks with the government and the Congolese people to see how peace can prevail in the country and to encourage solidarity among the various communities and ethnic groups.

“There are those who come from elsewhere to divide you. But they don't divide you because they love you. They divide you for their own interests, that they seek in your country.

“Weapons can only cause victims. They can never bring you development and wealth,” he said.

Kenyatta met religious and traditional leaders, representatives of local groups from eastern DRC as well as women associations from Ituri, North Kivu and South Kivu. He also spoke with members of the governments and foreign diplomats.

The eastern DRC has been plagued by fighting by at least 122 rebel groups, according to the United Nations, for more than 25 years.

The M23 - a mostly Congolese Tutsi group - has advanced towards Goma, the capital of North Kivu province, and is stationed at 25 to 30 kilometres from the city. Kibumba is 20 kilometres away from Goma.

The M23, Allied Democratic Forces (ADF), Cooperative for the Development of Congo (CODECO), and the Mai-Mai are among the most deadly in North Kivu and Ituri, two mining provinces bordering Rwanda and Uganda.

The M23's attacks have soured relations between DRC and Rwanda. President Tshisekedi called the rebel commanders “terrorists” who receive financial and logistical support from Kigali.

Tshisekedi hits out at Rwanda over alleged backing of DRC rebels

Kinshasa expelled Rwanda's ambassador at the end of October as the M23 advanced, and recalled its envoy from Kigali.

Rwanda denies providing any support for the M23 and accuses the Congolese army of colluding with the Forces for the Liberation of Rwanda (FDLR) -- a notorious Hutu rebel movement involved in the 1994 genocide of Tutsis in Rwanda.

Meanwhile, civilians are trapped in the clashes opposing the rebels and the DRC army.

“We were expecting a humanitarian corridor to evacuate them over the week end but the heavy fighting made it impossible to set it up,” said Henri Mahabo, the head of a civil society group in the eastern province of Rumangabo, held by the M23.

He told RFI's Pauline Zidi that there are, at least, 500 refugees arriving at the camps every day.

The level of violence in eastern DRC has mobilised the region in a bid to ease the tension. Angolan President Joao Lourenco, appointed by the African Union as a mediator in this crisis, met President Tshisekedi in Kinshasa on Saturday 12 November, after visiting President Paul Kagame in Rwanda the previous day.

The first Kenyan soldiers - about 100 - arrived in Goma on Saturday as part of a regional East African force.