Mismanagement the cause of Ghana's economic hardship — CPP 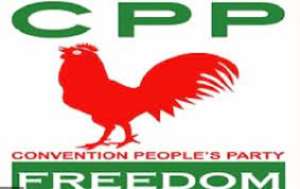 He called on the National Democratic Congress (NDC) to support the Nkrumaist tradition to overcome the ruling New Patriotic Party (NPP) in Election 2024.

“I pray that NDC as it stands today, will help organize and support the CPP to push the elephant into the bush for it never to come back again,” he stated in a solidarity message at the NDC Greater Accra Regional Delegates Conference to elect regional executives.

The CPP Greater Accra Regional Chairman commended the performances of the NDC’s 136 Members of Parliaments who had stood for the poor and spoken against the hardship of Ghanaians.

Mr. Addo assured that the CPP would have a sister relationship with its counterparts in the Greater Accra Region to ensure that the region would be established as the true capital of Ghana under the control of the CPP.

Meanwhile, Professor Joshua Alabi, Chairman of the NDC Greater Accra Regional Elections Committee has urged the members to give their maximum support for a smooth process.

He noted that the election of regional executives was a constitutional requirement as such all party members are expected to collaborate to ensure that the party goes through and comes out united.

He noted that at the end of the elections, the NDC would be the winner although every aspirant was capable of performing whatever role assigned saying after the conference all would be incorporated into the party towards working for rescue mission 2024.

In a related development, Mrs. Happy Abla Amegashie, who contested for the Greater Accra Regional Deputy Treasurer has stated the NDC needs the right personalities to lead the party into the 2024 General Elections for a resounding victory.

She has, therefore, called on the delegates to vote for the right people to manage the party for the next four years to move it out of opposition to form the next government for a better Ghana.

Mrs. Amegashie emphasized that "we are in opposition and we need the competent people to lead us to victory in the coming 2024 elections".

On his part, Mr. Elvis Afriyie Ankrah, NDC General Secretary aspirant has called on delegates across the country to elect competent executives, adding that those of them going for the National elections look forward to a peaceful and better atmosphere that would see them being elected to their desired position.

Mr. Isaac Ashai Odamtten, NDC Member of Parliament for Tema East Constituency has called on adherents of the party to stand firmly and move forward for the party to recapture power to serve Ghanaians.

Mr. Odamtten in an interview said that at the end of the election being supervised by the Electoral Commission (EC) “we should all see ourselves as winners, no losers, and work together for the total liberation of the country”.

The Tema East MP urged the party faithful to consider the best interest of the nation and the party; “we must team up to redeem Ghana for generations yet unborn, we have a duty to save this country through Election 2024”.

Mr. Odamtten noted Ghanaians are calling for the NDC to redeem the country, “we cannot fail the suffering people of Ghana, we are all going through difficult times and all that our current government is noted for is blaming others for its mismanagement of the economy”.