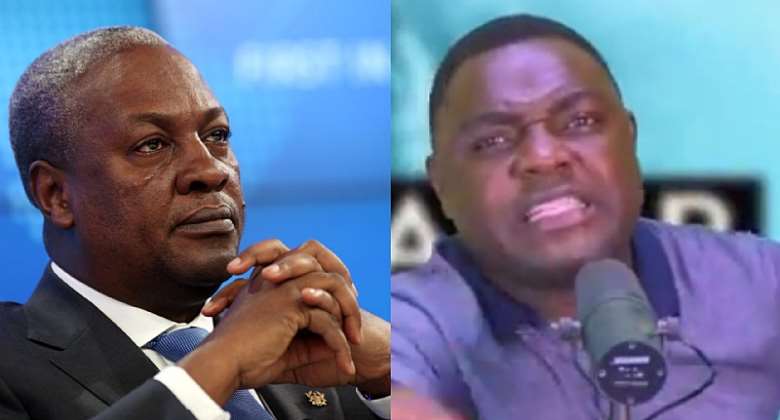 Ex-President John Mahama and his NDC, after realizing the peerless and unprecedented achievements and contributions of the Agric sector towards the sustainability of this economy, have recklessly and uncivilised directed all their ammunitions to attack the personality of the Sector Minister, Dr. Owusu Afriyie Akoto.

Since their "intelligent" lies and "intellectual dishonesty" debate against the Agric sector have all been crushed by scientific data and records, they've now resorted to employ a known buffoon, gobshite and unmitigated glutenous charlatan who makes his dirty money out of the concocted lies and deceits he peddles to mar the dignity and reputation of persons with enviable achievements in both social and political life.

John Mahama and his NDC apparatchiks have now found Kelvin Taylor as a honcho in discrediting the peerless achievements of the Agric Minister, and to claim that he cannot be a better alternative than the Incompetent John Mahama who couldn't even put common electricity in our cables for many years of his regime until he was uprooted by Ghanaians like "bankye" (Cassava). It is incumbent on me and many other reasonable Ghanaians to expose their deceit, and confirm to the NDC that indeed Dr Owusu Afriyie Akoto is a better alternative than their Mahama.

First of all, Kelvin Taylor has doctored an audio of a radio interview that Dr. Owusu Afriyie Akoto granted in 2008 during the heat of the NPP parliamentary primaries, and he is using it to paint the Agric Minister as an arrogant man.

What that loud but empty charlatan is refusing to appreciate is the fact that Dr. Owusu Afriyie Akoto, despite his pedigree and status in life, is humble, down to earth, affable and even more respectful than Kelvin Taylor's own John Mahama who stood at the centre of the heart of Asanteman and insulted the integrity of Ashantis with his infamous tarring Ashantis roads with gold comments. If there's any politician who is arrogant and doesn't respect human beings, then it is John Mahama and never Dr. Owusu Afriyie Akoto.

Secondly, Kelvin Taylor is creating the impression that the Agric Minister is a failure because he has not been able to set up a Fertilizer Manufacturing Plant. This is ridiculous and highly unthinkable.

If setting up a Fertilizer Manufacturing Plant is all that easy, why then the NDC, for their almost 30 years of ruling this country, couldn't set up one for this country? Talk is indeed cheap !

Setting up a Fertilizer Manufacturing Plant requires a minimum amount of Two Billion Dollars ($ 2.0 billion). And that is why all successive governments including that of John Mahama, have not been able to venture into that enterprise.

The good news is that, It is only under this Akufo Addo's government through the ingenuity of the fantastic Agric Minister, Akoto, that advanced discussions with potential investors have been reached to establish such a plant at Jomoro in the Western region using the Nation's newly found gas discoveries by Tullow.

Moreover, Ghana has witnessed the greatest addition to the fertilizer sector under Dr. Akoto than under any Agric Minister. Ghana currently has six (6) fertilizer blending factories, including Omnifert Limited and Glofert Limited; which is the largest in Ghana and the third (3rd) largest in West Africa, in full operation. In addition, to mitigate the effect of the global inorganic fertilizer crisis, Government through the initiative of Dr. Akoto has improved the private sector’s expansion, production and use of organic fertilizers through Zoomlion, HJA Africa- OFA (Organic Farming Aid) and 18 other leading organic fertiliser suppliers.

Kelvin Taylor also claims that the Agric Minister has been allocated more funds yet he has not delivered and therefore, the Minister cannot be a better alternative than John Mahama.

This is a blatant deception and lie that has been cooked by the NDC to discredit the current best performing ministry of our economy. And these are the facts;

First of all, out of the 2.6 billion Cedis invested in the PFJ for the past five (5) years, it has raked in 50 billion Ghana cedis worth of food as returns.

Moreover, the PFJ started with the enrollment of 202,000 farmers across the country in the programme despite a target of 200,000 farmers. As of 2021, 1.7 million farmers had been enrolled on the Programme.

If a minister has been able to chalk all these successes in a space of less than Six (6) years, why can't he be a better alternative to manage this country than a man who couldn't even put electricity in our cables for all his years as a President?

Certainly, Dr. Owusu Afriyie Akoto is far a better alternative than John Mahama, and that's why many of our Party members are calling on him to come and lead this country.