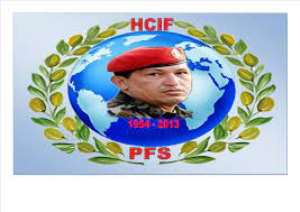 Our attention has been drawn to a European Union decision to renew the application of unilateral sanctions against the people of Venezuela for another year. We are gravely concerned at the growing negative impact of the existing sanctions regime on the innocent people of Venezuela, and thus threatening the peace, stability and development of the Latin American nation.

There is no moral arguments to justify unilateral sanctions, and wherever this gives expression would only amount to an encroachment on the sovereignty of States and undermines the norms of international rule of law. The European Union has been indulged in unilateral coercive measures that bordered on regime change in Venezuela; and playing to the tune of vendetta politics of its masters in Washington.

This destructive phenomenon is absolutely harmful to the well-being of the Venezuelan people. The European Union can morally accept that its policy is destroying the civilian population of Venezuela, through preventing that country from maintaining essential life-supporting infrastructure, such as food, water, sanitation, health and electricity supply systems.

Unfortunately, the media has kept mute on the debilitating impacts of the sanctions against the Venezuelan people. They know what is happening, that the inability of the Venezuelan Government to obtain essential goods, equipment and spare parts is having a great impact on ordinary citizens. These inhumane and outdated policies pursued by foreign powers are largely responsible also for the instability, violence, malnutrition, hunger, starvation and underdevelopment in Africa, today.

Our understanding of the current situation in Venezuela is that, not that the Venezuelan Government cannot purchase essential goods needed for its people, but the fact that it has been prevented from doing so, as a result of the sanctions is very disturbing. The grim reality of the situation on the ground is that the sanctions have created considerable damages on the economy of Venezuela so much that, tests and control during pregnancies, for delivering babies, for vaccination of children and getting medical aid have claimed a significant death toll on the civilian population, particularly women, children and elderly people. The inability to import spare parts and the impacts on electrical power generation are preventing electric pumps from supplying water for drinking and sanitation purposes.

In such a dire situation like Venezuela, when economic activity declines, it is the women who bear the brunt most, and typically the first to lose their jobs and be targeted by organised criminals, who will take the advantage to exploit women for commercial sex.

Having stated the above, the Hugo Chavez International Foundation for Peace, Friendship and Solidarity is calling upon the European Union members-states to go back to the drawing table and have a rethink of their decision. We call on the EU to rescind its policy of collective punishments on the Venezuelan population.

May God save Venezuela!