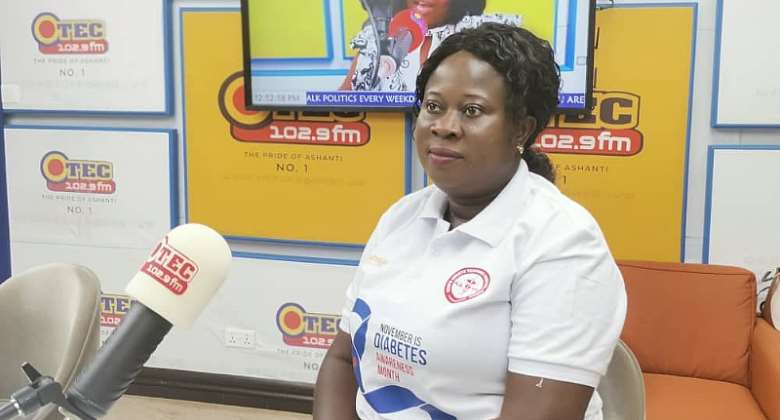 The Deputy Nursing Officer at KATH Diabetes Center says individuals at risk of diabetes can lower their blood glucose (sugar) without medication if they take less carbohydrate foods.

Speaking as a resource person on the "Apomuden Ahotoso" a health program on the Kumasi-based OTEC 102.9 FM on Sunday November 6, 2022, Mrs Agnes Boateng emphasized that "one of the best ways to fight diabetes was to eat foods that will help keep your blood sugar (glucose) levels in check."

"Researchers found that people who followed a low-carb diet for at least six months saw a greater drop in haemoglobin A1c (HbA1c), a marker for blood glucose levels, compared to people who ate their usual diet," she told the host, Cate Appiah Boateng, Radio Nurse.

Ghana on Friday, November 11 joins the rest of the world to mark this year’s World Diabetes Day.

Ahead of the celebration, OTEC FM's Health desk led by Mrs Cate Appiah Boateng has dedicated all activities on their show to diabetes education in the entire month of November.

The theme for World Diabetes Day 2022, "Education to Protect Tomorrow" is aimed at creating awareness since educating the public can play a huge role in managing and controlling the condition.