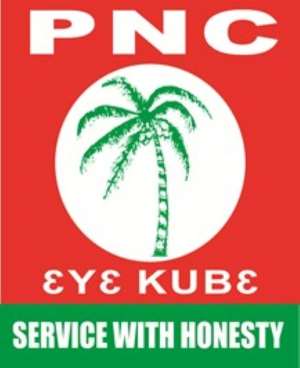 The People’s National Convention (PNC) has accused the Electoral Commission (EC) of blocking its progress.

In a statement released today, Friday, 11 November 2022, the PNC explained the above accusation.

According to the PNC, the EC has informed their dismissed executive, Dani Baah, by “a letter,” that it is suspending “all engagements with PNC until the leadership crisis is resolved.”

The 30-year-old political party has taken issues with this and argue that it has “provided enough evidence to show that the party dismissed Dani Baah and David Apasera.”

The PNC then outlined what led to their dismissals.

First, they narrated Dani Baah and David Apasera “were suspended for embezzlement of party funds and misconduct.”

Following this, “the duo took the PNC to court. The court directed them back to the Party to seek redress,” PNC’s statement continued.

Without clarification, the party said the two men “went to do their ‘own thing’,” and thereafter, “went back to the court, only to [abandon] the court process [eventually].”

Subsequently, “the Party used its appropriate constitutional provisions (article 14(1a) and (1b) in particular) to finally dismiss them,” only for them to “resurface when the Party announced a road map and started organising its internal elections.”

Finally, the People’s National Convention hoped the Electoral Commission would “immediately revert its decision taking into consideration the evidence provided” to the effect that Moses Dani Baah and David Apasera are in fact no longer members of the party and so the party’s prevailing posture regarding them is not evidence of a “leadership crisis.”

The PNC’s letter, addressed to the Chairperson of the EC, was signed by the party’s General Secretary, Janet Asana Nabla, with relevant documents attached.

Moses Dani Baah is a former Member of Parliament (MP) for the Sissala East constituency on the ticket of the PNC and until the second quarter of 2022, the National Chairman of the party.

Mr David Apasera, the national leader and the 2020 flagbearer for the party was also sacked at the same time.