World needs US 'to be climate leader', Ugandan activist 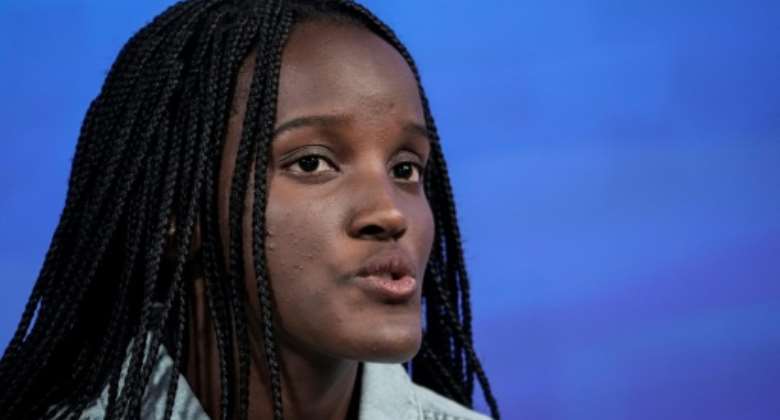 Nakate urged Biden to summon the 'political will' to support communities most affected by the burgeoning impacts caused by a warming world. By Drew Angerer (GETTY IMAGES NORTH AMERICA/AFP/File)

Ugandan climate activist Vanessa Nakate on Thursday urged US President Joe Biden to help those most affected by the ravages of global warming, a day before his arrival for UN climate talks in Egypt.

Nakate, a Goodwill Ambassador for the United Nations' children's fund UNICEF, urged Biden to listen to climate science and those "on the frontlines of this crisis".

She also called for fossil fuels to be phased out and funding to help vulnerable countries cope with accelerating climate impacts.

"The world needs the United States to be a climate leader in our fight for climate justice," the 25-year-old told AFP in an interview at the COP27 climate conference in the Red Sea resort of Sharm el-Sheikh.

"The message is for President Biden to stand with the people on the planet and the coming generations."

Inspired by Sweden's Greta Thunberg, Nakate -- who founded the Rise Up Climate Movement in her native Uganda -- has become a prominent voice among global youth fighting for climate action and justice.

Although she is unlikely to meet the US president in person during his fleeting trip to the two-week climate talks, Nakate urged Biden to summon the "political will" to support communities most affected by the snowballing impacts caused by a warming world.

This year alone has seen a barrage of extreme heat waves and crop-withering droughts across the world, while catastrophic floods have swept Pakistan and Nigeria.

Floods had also ripped through Nakate's own region in Uganda, she said.

"When you look at all these crises that are happening and they are just around you in your community, you have no choice but to come here and believe that another world is not only necessary but it's also possible," she said.

Thunberg has snubbed the UN talks in Egypt -- billed as an "Africa COP" -- over concerns about restrictions for campaigners.

But Nakate said she had been compelled to attend because of the growing harm suffered by people in the global south, adding that activists were using social media and interviews in the press to keep up the pressure on leaders.

She said it was more important than ever "to hold our leaders accountable and to remind them that we cannot eat coal, we cannot drink oil and we cannot breathe gas".

Devesatating drought in the Horn of Africa have pushed millions to the brink of starvation. By Tony KARUMBA (AFP)

In a world gripped by energy, food and inflation crises -- fuelled by climate impacts, the war in Ukraine, and the pandemic -- the challenges of soaring prices are too often seen only through the eyes of wealthier nations, Nakate said.

"In countries like Uganda, many people are being impacted and suffering because, as the fuel prices rise, transportation rises, food prices rise as well," she said, adding that many people "just don't know how to keep up with it".

She called for the international community to step up investments that address energy poverty in Africa and support the shift to renewable power.

"If there is no climate finance to support that transition, many of our countries are being pressured into taking money from fossil fuel companies so that they can lift their communities out of energy poverty," she said.

In her role for UNICEF, Nakate has recently visited communities affected by the devastating drought in the Horn of Africa, where millions are on the brink of starvation, including children.

These tragedies can reverberate for many years throughout an individual's life, even generations, Nakate said.

But she noted that Biden and the other world leaders who have travelled to Egypt this week should understand that their positive actions also have the potential to echo into the future.

"I've heard of something called the butterfly effect, whereby just one thing that may seem like a small action can end up affecting the lives of so many people," she said, adding that leaders have a choice whether their effect is positive or negative.

"If it's to be positive, then one action right now will benefit not only our generation, but also the coming generations," she said.