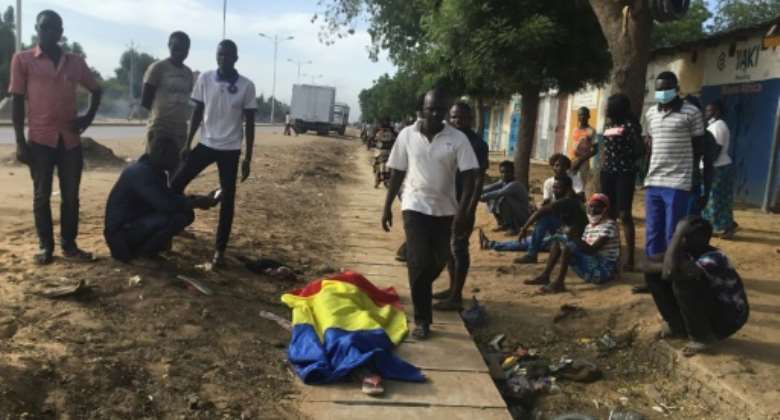 Opposition groups had encouraged demonstrations on October 20 to mark the date when the ruling military had initially promised to hand over power. By - (AFP/File)

The leaders of Chad's main opposition groups said on Wednesday that they had been forced into hiding over fears for their safety, following a deadly crackdown on anti-junta demonstrations.

Succes Masra, head of the Transformers party, told AFP he was in "another country" because he was wanted by the "presidential guard".

Max Loalngar of Wakit Tamma said he was "hiding somewhere within the country" to avoid arrest.

Both opposition figures have accused the junta of "extra-judicial killings" and mass arrests as they suppressed protests over delayed elections.

Officially, around 50 people died when security forces opened fire on the demonstrators in the capital N'Djamena and several other cities last month. But opposition groups say the actual toll was much higher, with unarmed civilians massacred, at least 300 people wounded and hundreds more arrested.

Masra and Loalngar said their groups have called on the International Criminal Court in The Hague to investigate alleged "crimes against humanity".

The African Union Commission has condemned the violent repression, while Amnesty International said that a child was among the several dozen killed by the authorities' excessive use of force.

Opposition groups had encouraged demonstrations on October 20 to mark the date when the ruling military had initially promised to cede power -- a timeline now extended by two years by General Mahamat Idriss Deby Itno.

The 38-year-old took power from his father, Idriss Deby Itno, who ruled for 30 years before dying in an operation against rebels in April 2021.

The junta has branded the protests an "insurrection" supported by foreign powers.

In the aftermath, the government made hundreds of arrests, suspended all party political activity and imposed a curfew.

General Mahamat Idriss Deby Itno announced in October that he would stay in office during a two-year transition to elections. By Denis Sassou Gueipeur (AFP/File)

Authorities said the casualties included a dozen members of the security forces.

Prime Minister Saleh Kebzabo told AFP on Tuesday that the country had accepted the principle of an international inquiry "as soon as possible" into the protest deaths.

The following day, chair of the African Union Commission Moussa Faki Mahamat -- a former Chadian prime minister -- stressed "the urgency of a serious and credible investigation" to bring those responsible to justice.

The Chadian Convention for the Protection of Human Rights, a local civil society group, says 600 people have been detained since October 20, with most "exiled" to labour camps and prisons far from the capital.

The World Organisation Against Torture says up to 2,000 people have been thrown behind bars.

Opposition figures Masra and Loalngar said the authorities had been hunting down their supporters in recent weeks.

"On October 21, soldiers from the presidential guard came to get me at our headquarters and when they didn't find me, detained 27 members of my team," said Masra.

"Only four are left alive being interrogated. The others are dead, some of those who were with them have told me, even if we don't have the bodies," he claimed.

"The manhunt is ongoing across the country."

Loalngar told a similar story: "Security forces are going from house to house, people are being arrested for anything," he said. "Like all our activists, I had to go into hiding."

Contacted by AFP, several government representatives declined to say how many people had been arrested since October 20.